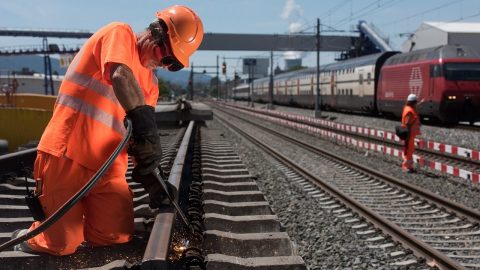 Swiss Federal Railways (SBB) is constructing or planning to construct the new tunnels. They will allow the company to increase the capacity of its railway network and to create the four-track corridors between major cities in Switzerland. This year, the high-capacity route will be launched between Bern and Zürich.

Today, the main four-track railway corridor in Switzerland connects Basel and Zürich. It has a length of over 50 kilometres and consists of two double-track lines with slightly different routes. At the same time, the route includes the short two-track exception near Muttenz railway station. This year, Zürich, the Swiss largest city, will get a new four-track connection. With putting into service the three-kilometre-long Eppenberg tunnel at the end of 2020, the four-track corridor will be provided between Zürich and the capital city of Bern. This connection will have several similarities to the Basel – Zürich link: the three-track exception near Bern Wankdorf and two double-track lines with little different routes.

As for the long-term plans, SBB intends to construct the nine-kilometre-long Brüttener Tunnel between Winterthur and Dietlikon. It will eliminate the bottleneck the current double-track bottleneck between Effretikon and Winterthur. After its integration into the SBB network with the help of additional tracks, Switzerland will receive the new high-capacity corridor between Zürich and Winterthur, its satellite city (also with slightly different routes). Moreover, Zürich Airport will also get an improved connection to Winterthur (via Bassersdorf). This improvement will be completed by 2035 and will have a great impact on the Zürich S-Bahn network.

Another four-track corridor is being planned alongside Lake Geneva. It will connect two major cities located on its shores – Geneva and Lausanne. This project is under consideration, therefore, its details are unknown. It is worth to recall that Geneva got a new S-Bahn network known as Léman Express at the end of last year. Its two of the six routes run to the neighbouring communities of France. The planned four-track corridor to Lausanne could become an extension of Léman Express network.