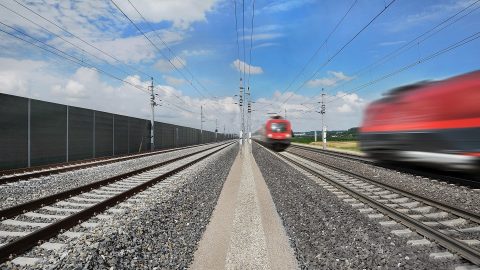 The increase in train traffic is forcing the Austrian Federal Railways (ÖBB) to improve the existing infrastructure. Among the solutions is the construction of the four-track mainlines. There are two high-capacity railways on the country’s network. ÖBB plans to develop other four-track sections in the coming years.

ÖBB started to construct the four-track railways more than 20 years ago. In December 1989 the Federal Ministry for Transport, Innovation and Technology of Austria declared the Vienna – Linz railway (also known as Westbahn or the Western Railway) as a high-performance line. Since that time, it was being gradually converted from the conventional two-track to high-capacity four-track route. This 188-kilometre line, which connects Vienna to the major cities of Upper and Lower Austria, became the entirely four-track railway in 2015. Now, 32 per cent of trains in Austria run on this line. The other high-capacity route is the 35-kilometre section of the Lower Inn Valley Railway (Unterinntalbahn) between Innsbruck and Jenbach. It is located in the western state of Tyrol and is in operation since 2012.

As of today, ÖBB-Infrastruktur, the infrastructure division of the Austrian national railway holding, will extend the four-track network with new sections. The Western Railway will be lengthened to Wels. “The goal is to commission the new four-track section between Linz and Wels in 2026,” ÖBB reported to RailTech. To this end, the company has already started some maintenance works at Linz Central station last year. It is also planning the construction works on the Linz – Wels section. “The four-track expansion of the western section between Linz and Wels, one of the largest rail projects in Upper Austria, is getting closer. It will begin with the four-track expansion of the west side of Linz Central station and the Linz – Marchtrenk section. Currently, this stretch is being examined by responsible authorities,” ÖBB’s press office noted.

The Lower Inn Valley Railway will be also improved with the 23-kilometre four-track section between Radfeld junction and Schaftenau station (towards the German border). Another development in the state of Tyrol will be implemented in other direction, towards Italy, with launching the 55-kilometre Brenner Base Tunnel on the Austrian-Italian border. The end of the construction works is scheduled for 2028. After completing the tunnel, the Austrian section of the so-called Brenner Railway (Innsbruck – Bolzano – Verona) will be a four-track line in operational terms (two new and two existing tracks).

Two other projects in this area will be carried out in Vienna and its vicinity. The four-track lines will appear between the stations of Vienna Meidling and Mödling in Lower Austria as well as between Vienna and Wiener Neustadt. In addition, ÖBB-Infrastruktur is modernising the Southern Railway between Vienna and Graz. Within this project, the 27-kilometre Semmering Base Tunnel is being constructed. Its completion is planned for 2027. After that, the Gloggnitz – Mürzzuschlag section of the Southern Railway will also become a four-track route in operational terms (two tracks of the picturesque Simmering Railway and two new tracks in the tunnel).

According to ÖBB, the four-track railways provide many benefits, especially for the passengers. The sections with higher capacity allow the operator to offer more train connections and reduce the travel time. After launching the 60-kilometre four-track line between Vienna and St. Pölten in December 2012, the journey between Vienna and Linz has been reduced by 19 minutes to 1 hour 14 minutes. Now, the trains run on this section at a speed of up to 230 kilometres per hour.

Moreover, the four-track lines have other advantages. “The four-track expansion creates the conditions for an increase in capacity in passenger and freight transport as well as for better timetables in local transport. Both are important foundations for higher quality and shorter travel times in rail traffic. In addition, an efficient rail infrastructure strengthens the business location and keeps Austria competitive in European and international comparison. For instance, rail passengers reach their destination faster than by car. As a result, the number of long-distance travellers has doubled in the past ten years. In times of climate change, this contributes to a positive climate balance,” ÖBB summed up.