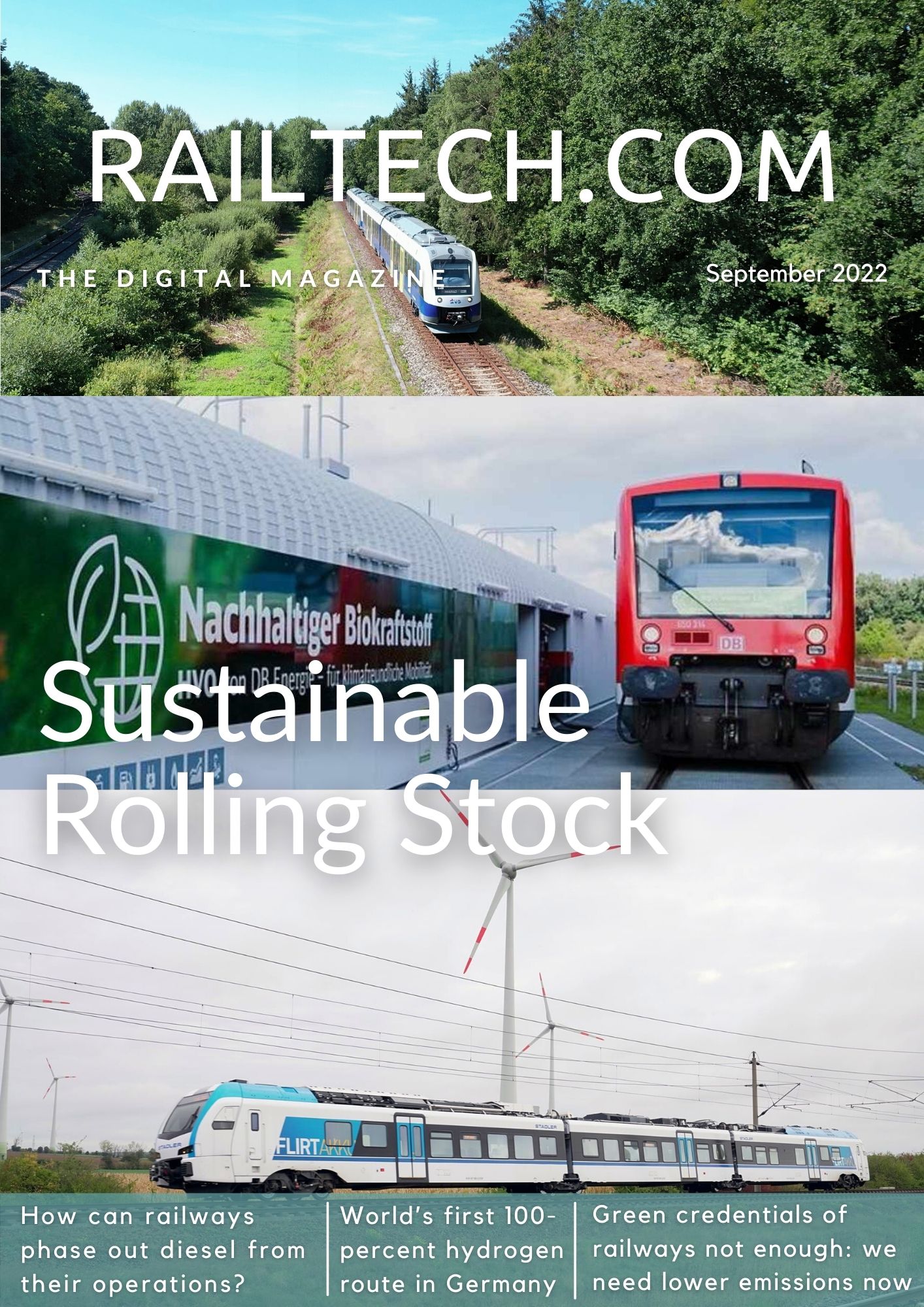 September 2022 – In this RailTech Digital Magazine about Sustainable Rolling Stock you can read about how railways can phase out diesel, the possibilities of HVO fuel and the future of hydrogen in an article with Sittipan Reinold, Program Lead Diesel Exit Rail at Deutsche Bahn, Frederik Wewetzer Programme Manager Hydrogen and Fuel Cells at Now GmbH, and Marko Kapetanovic, PhD Researcher at Delft University of Technology.

In an interview with Marleen van de Kerkhof from The Decarbonisation Company, she talks about needed action and retrofit possibilities for on-track machines, and the magazine includes articles on the first hydrogen train route in Germany and plans for partial electrification for operation with battery trains.

You can download the digital magazine on Sustainable Rolling Stock here. 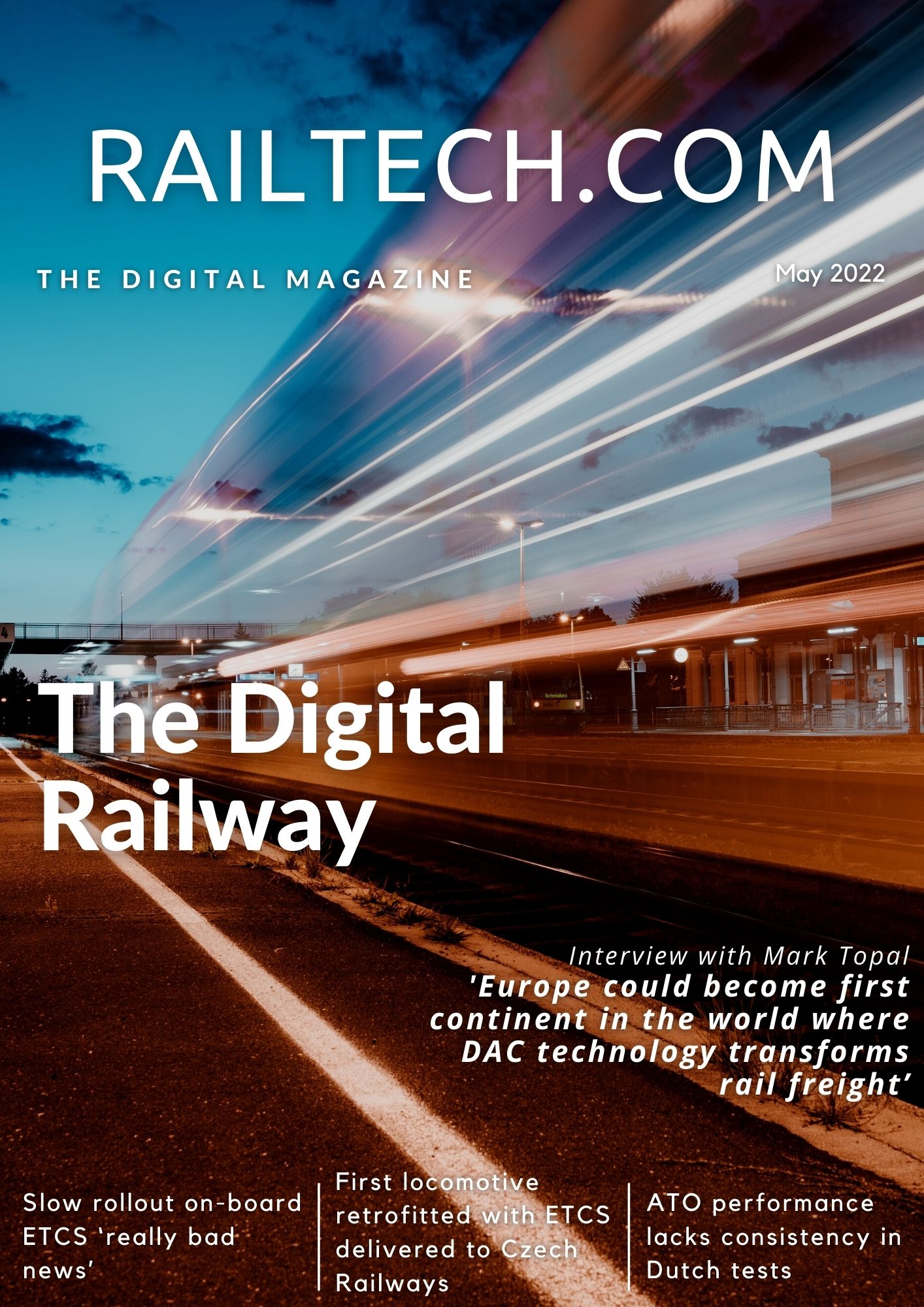 May 2022 – This magazine dives into several aspects of Digital Rail. Read an interview with Mark Topal, programme director of the European DAC Delivery Programme, who looks back on the history and future rollout of Digital Automatic Coupling for freight wagons, which can greatly improve capacity.

It also features articles about the first retrofitted locomotive with ETCS for Czech Railways, and the overall implementation of on-board ETCS, of which the slow rollout is ‘really bad news’ according to European ERTMS Coordinator Matthias Ruete. In addition, the results of tests with Automatic Train Operation (ATO) over the older ATB signalling in the Netherlands are covered.

You can download the digital magazine on Digital Rail here. February 2022 – Taking into account increasing amounts of rainfall, heat waves and heavy storms, and adapting the infrastructure to become more resilient is a huge task that rail has to carry out in the coming years.

In an exclusive interview, Corinna Salander, director of the German Centre for Rail Traffic Research (DZSF) talks about the increasing awareness about climate adaptation after the flooding in Germany and other countries, last summer. The magazine also features articles about adaptation projects of Network Rail in the UK, the biggest climate change threats to the Netherlands and using satellite images to map floods and rail subsidence.

You can download the digital magazine on Climate Change Adaptation here. 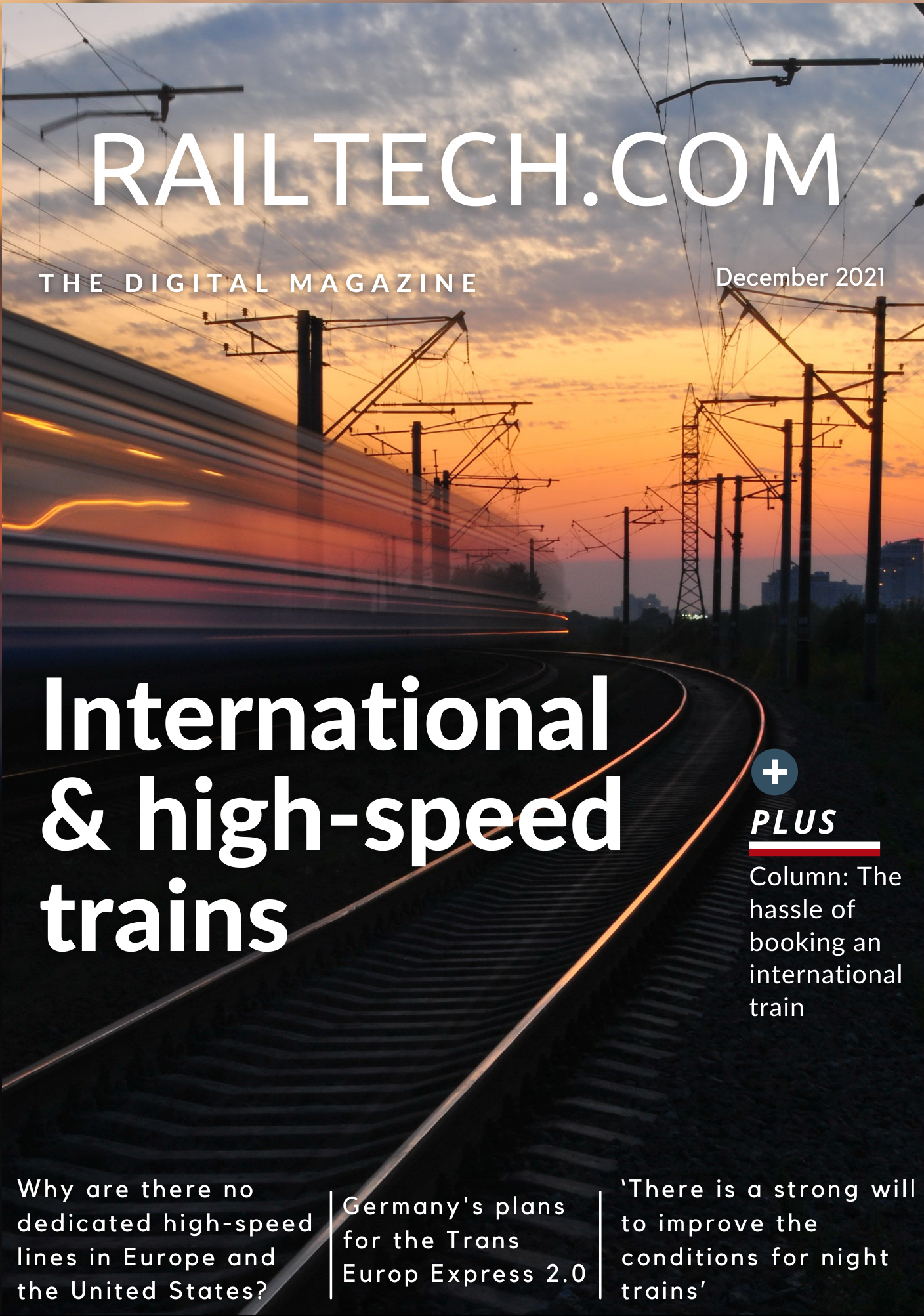 December 2021 – International and high-speed trains are in the spotlight as they can play a large role in the transition to sustainable mobility.

This magazine features interviews with Enak Ferlemann, Germany’s previous Parliamentary State Secretary for Transport and Digital Infrastructure about the Trans Europe Express 2.0, and with Philippe Lorand, Senior Advisor at the UIC Passenger Department about the revival of night trains.

Read European Passengers’ Federation board member Arriën Kruyt‘s column about the hassle of booking an international train and an interview with Torkel Patterson, board member of the International High-speed Rail Association about dedicated high-speed rail lines and why going underground could be the future.

You can download the digital magazine on International & high-speed trains here. 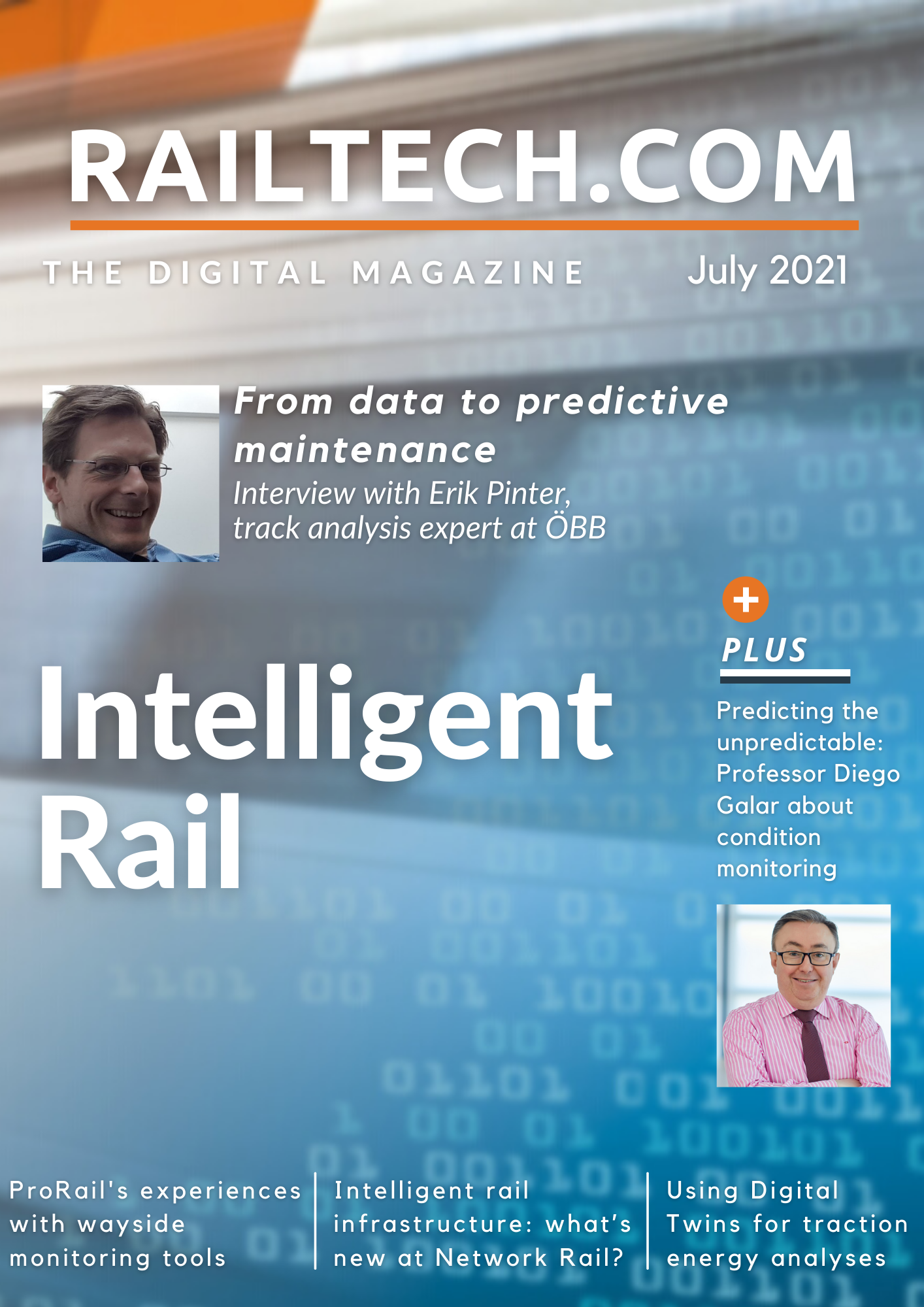 July 2021 – This RailTech magazine dives into intelligent rail infrastructure, data platforms, and condition monitoring. It features an interview with Tim Flower, Chief Engineer at Network Rail’s Intelligent Infrastructure Programme, and with professor of Condition Monitoring Diego Galar about predicting the unpredictable and what we have learned about Condition Monitoring in the past 5 years.

You can download the digital magazine on Intelligent Rail here. 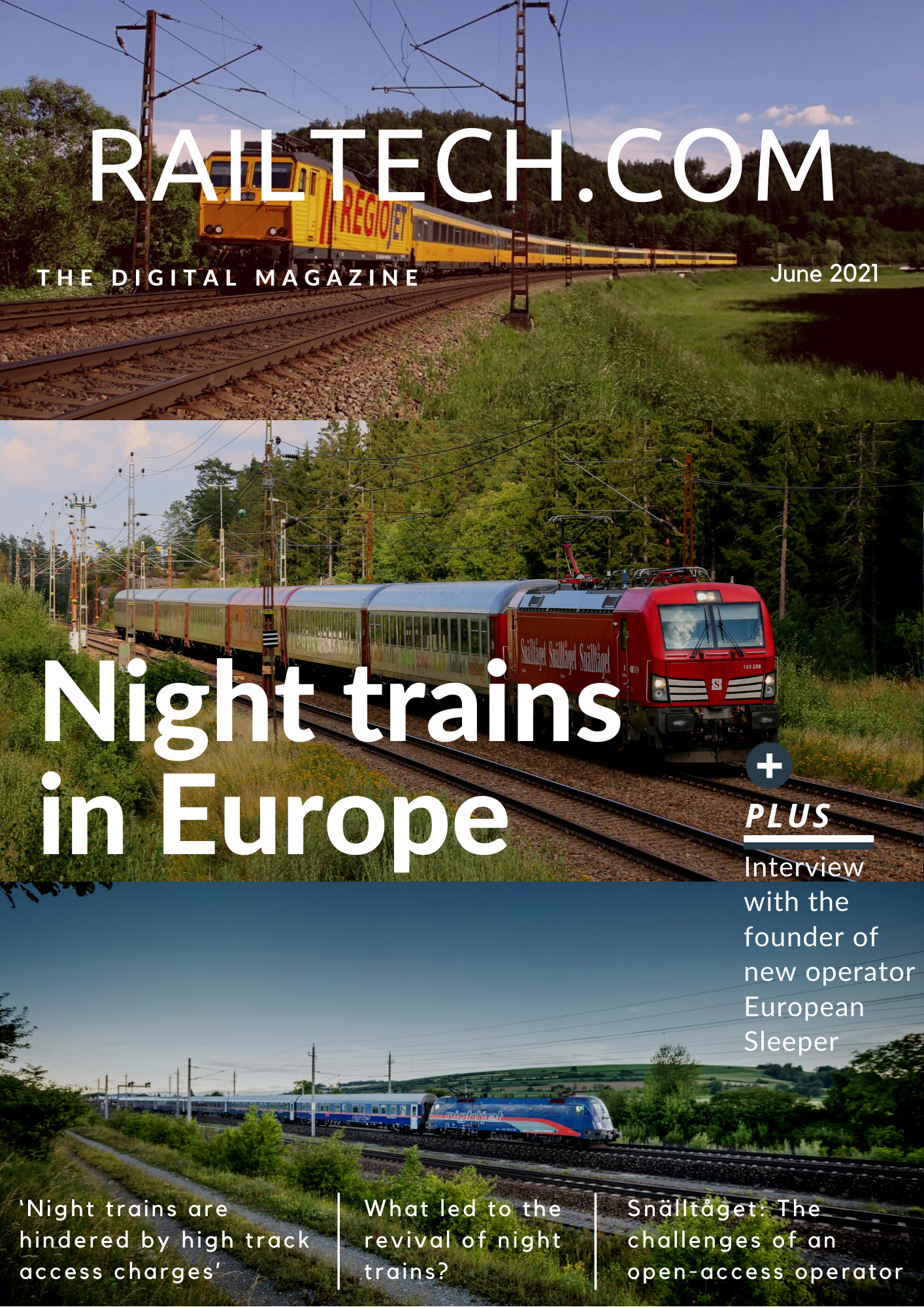 June 2021 – Night trains are making a comeback in Europe. Plans for a Trans Europ Express 2.0, further expansions of RegioJet and Snälltåget and the founding of several new night train start-ups show there is no doubt about a revival of sleeper trains. However, there are still many obstacles in the way of a real open European market where night trains are a good alternative to flights for destinations all over Europe.

This magazine dives into what led to the revival of night trains and the challenges of an open-accessoperator as voiced by the head of Snälltåget. Read an interview with co-founder of start-up European Sleeper, about the plans of two Belgian entrepreneurs for a new night train and European Passengers’ Federation board member Arriën Kruyt’s case for lower track access charges for night trains.

You can download the digital magazine on Night Trains in Europe here. 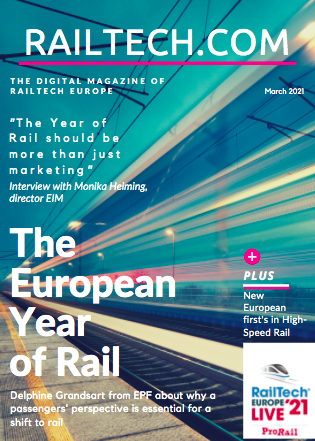 March 2021 – In light of the 40th anniversary of the TGV, the magazine will dive into several countries that are developing new first’s in high-speed rail. It takes a look at the European Smart Mobility Strategy, which aims to triple high-speed rail by 2050.

Maurizio Castelletti from the European Commission talks about whether these rail goals are achievable, Delphine Grandsart from EPF stresses the importance of the passengers’ perspective in the shift to rail and Monika Heiming, director of EIM Infrastructure Managers underlines that the Year of Rail should be more than just marketing.

You can download the digital magazine on the European Year of Rail here.