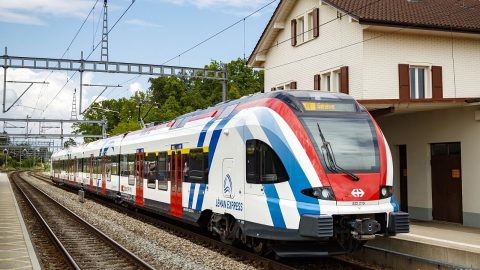 Switzerland and France have been connected with a unique railway network. It is focused on commuter transportation but also has some features of the metro system and international trains. The new system known as Léman Express provides the fast and convenient train service from the Swiss city of Geneva to the canton of Vaud and to the neighbouring French departments of Haute-Savoie and Ain.

The official inauguration of the Léman Express network (also known as S-Bahn Léman or RER Léman Express) took place on Thursday, 12th December. It was attended by a wide range of French and Swiss officials and representatives of local authorities. For the ordinary passengers, the new S-Bahn rail network has become available on Sunday, 15th December, when the new train timetable has come into effect. It is operated by Lémanis, Geneva-based joint venture of SBB and SNCF, which was established in March 2017. The network is served by 40 trains under the Léman Express brand including 23 Flirt vehicles of SBB and 17 Régiolis (Coradia) vehicles of SNCF. They provide around 240 train connections per day.

Léman Express is the largest cross-border S-Bahn network in Europe. Its trains connect Geneva (Cornavin train station) to Coppet, Bellegarde, Evian-les-Bains, Annecy and St-Gervais-les-Bains-Le Fayet. The entire 230-kilometre network includes six lines and 45 railway stations. Only line L5 Geneva – La Plaine is located within Switzerland. Five other lines are cross-border. The routes L1, L2, L3, L4 start in Coppet, the canton of Vaud, and run via Geneva to Annemasse, the French city in the Haute-Savoie department. Line 4 is terminated at Annemasse railway station while three other routes split in three different directions in the Haute-Savoie department: L1 goes northeastwards to Evian-les-Bains, L2 – southwestwards to Annecy and L3 – southeastwards to Saint-Gervais-les-Bains-Le Fayet. The remaining line L6 connects Geneva to Bellegarde in the French department of Ain.

The core of S-Bahn Léman is the Cornavin‒Eaux-Vives‒Annemasse (CEVA) route that was constructed for eight years. It consists of the upgraded and newly built sections. The lines from Geneva to Bachet-de-Pesay and from Eaux-Vives to Annemasse have been modernised while the Bachet-de-Pesay – Eaux-Vives section has been constructed from the ground. Within the project valued at around 1.8 billion euros, five new train stations Lancy-Pont-Rouge, Lancy-Bachet, Genève-Champel, Genève-Eaux-Vives and Chêne-Bourg have been constructed and Annemasse train station has been renovated completely. The CEVA route includes a railway tunnel under the commune of Champel and an underground section from Eaux-Vives to Annemasse. This railway project was funded by the Confederation and the Canton of Geneva on the Swiss side and by various public bodies with the support of the European Union on the French side.