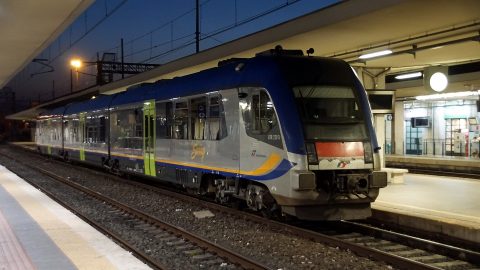 Polish rolling stock manufacturer Pesa Bydgoszcz is moving forward in the foreign markets. It has started to supply the third batch of diesel trains to Trenitalia. This year the Polish company will produce the diesel trains for Belarusian Railway and the low-floor trams for the Romanian city of Iași.

On Wednesday, 5 February, the 45th Atribo diesel train departed from the Polish city of Bydgoszcz where Pesa is based. It will be delivered to the Italian national railway company Trenitalia. It is the third batch of the Polish-made trains ordered by Trenitalia. The parties started to cooperate at the end of 2013 when the Italian operator purchased 40 three-carriage diesel trainsets with possible options for additional units. This order was fulfilled in 2014-2016. The first Atribo vehicle began to serve the Trenitalia routes in March 2015. Afterwards, the Italian operator ordered four more trainsets in 2016. Two years later, in July 2018, other 14 Atribo vehicles were booked by Trenitalia. The latter must be supplied by January 2021. 10 of 14 trains will run on the island of Sardinia.

When Pesa fulfils the third order from Trenitalia, the number of its trains running in Italy will increase up to 99 units. Currently, there are 85 Atribo vehicles operated by various Italian railway companies. Over half of them, 44 trains, are used by Trenitalia. The remaining half is operated by the private companies: 27 units – by Ferrovie del Sud Est in the region of Apulia, 12 units – Ferrovie Emilia Romagna in the region of Emilia Romagna and two units – by Ferrovie Nord Milano in the northwest regions of Lombardy and Piedmont.

The other foreign deals will be performed in Romania and Belarus. Last week, the authorities of Iași chose Pesa as a supplier for 16 trams. It is the second Romanian city which purchased the trams from Pesa. In 2012 Cluj-Napoca, the second-largest city in Romania, acquired four Swing five-section low-floor trams produced by Pesa.

This time the Polish manufacturer will also produce the five-section low-floor light rail vehicles of the Swing family. The order costs 184 million lei (around 36 million euros) and will be fulfilled within the following eight months. Each tram will have a total capacity for carrying 239 passengers.

By the mid-2020, Pesa is committed to delivering three six-carriage diesel trains to Belarusian Railway. They are classified as the type DP6 or the type 760M (according to the Pesa’s classification). At the end of 2019, three vehicles of the same class were introduced on the Minsk – Vitebsk route. The new trains will run on the Minsk – Brest line.

As of today, Belarusian Railway operates 16 diesel trains supplied by Pesa. Besides the 760M units, two other types are running in Belarus: 620M (DP1) and 730M (DP3). Six one-carriage railbuses of the first type were produced by the Polish company in 2012-2013. The delivery of seven three-carriage diesel trains of the second type was divided into two batches: three units in 2014 and four units in 2016.