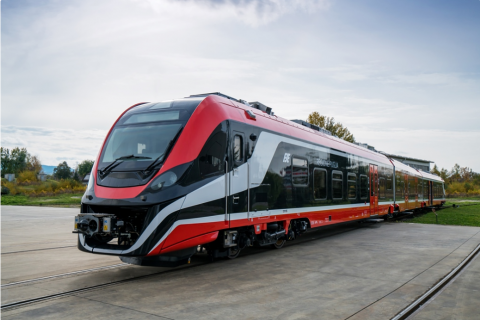 Italian train operator Ferrovie del Sud Est has signed a framework agreement with Polish rolling stock manufacturer Newag for the delivery of six three-car electric multiple units. The final deal will be specified and concluded on 28 February. The delivery worth 24.2 million Euros will be fulfilled within 18 months after the document signing.

The new order is an option of a deal signed in December 2015. The initial batch includes five trains while the supplement consists of ten sets. Taking into account a brand new request, the Italian operator still has a possibility to call for four extra units in future. The first Impuls train produced in Poland was delivered to Ferrovie del Sud Est in 2016. The further deliveries will consist of Impuls 2 units, a new generation of this type compatible with TSI 2014 and equipped with ERTMS Level 2.

The ordered trains will be the fourth batch of Newag’s rolling stock dedicated to Italy. Besides electric trains, Newag has also supplied diesel units to Italy. In December 2013, the Polish manufacturer concluded the first export deal with Ferrovia Circumetnea, a Sicilian narrow-gauge train operator in the surroundings of Mount Etna. The agreement included the delivery of four two-car diesel units with an option for six additional sets. Newag supplied four Vulcano trains in 2015-2016.

In December 2017, Ferrovia Circumetnea requested the delivery of one Vulcano unit, according to the deal concluded in 2013. The operator has also announced a call for an additional three sets if it has money to finance the deal. The ordered unit is most likely to be delivered this year while the future of three extra units is still unclear.