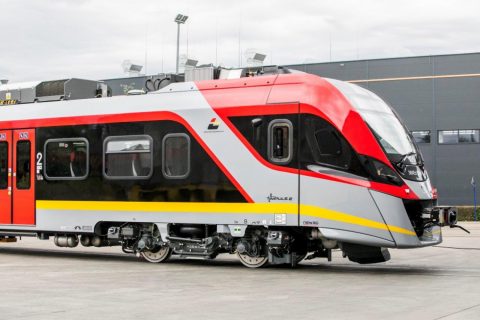 The Polish passenger rail operator Łódź Agglomeration Railway has launched a 62 million Euros programme for upgrading its fleet. The company will receive 14 electric multiple units Impuls 2 from December 2018 to June 2019 produced by Newag.

On December, 9 the passengers of Łódź Agglomeration Railway (LKA), one of the largest Polish regional railway operators, will start to travel on brand new three-car electric multiple unit EMU – Impuls 2. Polish rolling stock manufacturer Newag produced the train and represented it to the public on September. According to the 62 million Euros contract signed on February 2017, the operator will receive the other 13 units by the end of June 2019.

“Now we are waiting for the approval of the Office of Rail Transport for the new trains. The first one will run on tracks on December 9, when the new schedule will come into operation. The other 13 EMUs will be supplied to LKA by the end of June 2019,” told CEO of LKA Janusz Malinowski to RailTech during V Congress of Transport Development being held in Łódź on October 31.

LKA is the first Polish railway operator to use the Impuls 2 trains. This is a new generation of the Impuls EMU having been produced by Newag since 2012. Three-car EMUs has 65 meters long and 160-passengers capacity. Impuls 2 like its predecessor can speed up to 160 kilometres an hour but the new train is fully compatible with Technical Specifications of Interoperability (TSI 2014) and is equipped with the European Rail Traffic System (ERTMS) Level 2.

Besides the purchase, the operator is considering the modernization of its current fleet. “We have a project on the elongation of our trains. We intend to lengthen 10 two-car EMUs Flirt to three-car ones. We have prepared all the documents. I suppose that there will be a chance to sign the agreement on the co-financing the project at the beginning of the next year,” noted Janusz Malinowski.

Now LKA’s fleet consists of 20 two-car Stadler Flirt EMUs with 120-passengers capacity. They run on the routes in Łódź Agglomeration and in Łódź Voivodeship. On March 2016, LKA launched the first service outside its basic region. The operator connected Łódź and Warsaw, currently the service run only at weekends. However, LKA will not extend its business to other regions. “We have no plans to become the long-distance operator,” summarized Janusz Malinowski.