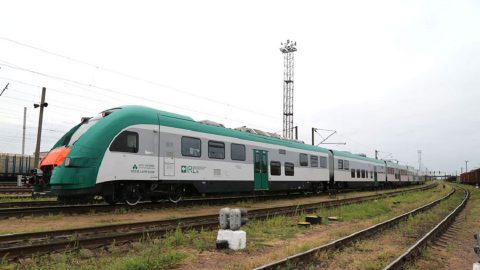 Belarusian Railway has presented a new type of diesel multiple unit supplied by Polish manufacturer Pesa. The new train consists of six cars and will become the longest diesel passenger vehicle in the company’s fleet. By the year’s end, Pesa will deliver two other units of this type. Three vehicles are scheduled to be supplied for the next year.

New trains were purchased with the help of ASB Leasing, a subsidiary of the state-owned Belarusbank. Belarusian Railway has classified the new vehicle as the type DP6 (type 760M – according to the classification of Pesa). It plans to use these units on the interregional routes from Minsk, the capital of Belarus, to Vitebsk, Grodno and Mogilev.

Each six-car train is capable to carry 311 passengers on seats, 25 of them in the first class. The vehicle is equipped with a special ramp for boarding of the disabled passengers. Also, the train has a multifunctional area for transporting wheelchairs, bicycles, prams and large luggage. To provide a comfortable journey, the DP6 diesel multiple unit was equipped with a Wi-Fi network, sockets near the seats, air-conditioning and infotainment system. The trains of this type can speed up to 140 kilometres per hour.

The longest passenger train running in Belarus is the Flirt electric multiple units developed by Stadler Rail and assembled mostly in Belarus. The Swiss manufacturer has supplied 18 Flirt vehicles for Belarusian Railway in 2011-2015. They were produced in the four-, five- and seven-car formation and have the seating capacity for carrying from 217 to 382 passengers (depending on the modification). 16 four- and five-car trains are used on the Minsk City Lines and regional routes. Two seven-car units were delivered in 2015-2016. They serve the interregional route between Minsk and Gomel, the second largest city in Belarus.