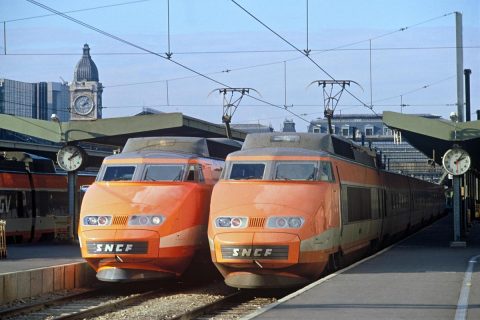 This week, France celebrates the 40th anniversary of the TGV. The French high-speed train has given the potential to help revitalise rail transport that was wondering about its future.

The TGV in France (Train à grande vitesse) is an undeniable success. To run continuously at 300 kilometres per hour was something that still seemed utopian in the early 1970s, despite much research in Europe. At that time, France still had to choose between the “old” wheel-rail technique of the SNCF and Alsthom (with an “h”), or a more disruptive technology promoted through Jean Bertin’s aerotrain. In the end, it was the ‘train’ that was chosen by President Pompidou, who was not a great fan of trains.

Very quickly, it became clear that in order to run at 300 kilometres per hour, it was necessary to have an infrastructure of its own, while retaining the essentials of railway technology: rails, ballast and energy distributed by catenary. The TGV was thus an opportunity to rebuild a new network and to bypass the many handicaps of the “old railway”, with its tight curves, tunnels, ageing bridges, multiple stations and a large number of switches. The new high-speed lines put a new spin on the civil engineering approach.

On 22 September 1981, François Mitterrand, newly elected President of the Republic, inaugurated the first high-speed train service between Paris and Lyon. Commercial service was opened to the public began five days later, on 27 September. The adventure of the TGV “à la française” began. It gave pride of place to the ideas of the SNCF and also Alsthom.

The TGV’s main objective was to compete with the airline industry rather than the road. With its orange livery designed to make people forget the depressing military green of the railway, the TGV redrew the map of travel in France and trains gradually moved beyond Lyon to Geneva, Lausanne, Marseille, Montpellier and Nice. For about fifteen years, it had a sympathetic ear all over the world. Then came other TGVs in Europe: ICE in Germany and TAV in Italy, inaugurated in the early 1990s, without the Alsthom concept.

After the south-east, the French high-speed network was extended first to Tours (September 1990) and then to Arras and Lille (May 1993). In December 1997, for the first time in Europe, a high-speed line crossed the border to Brussels. The TGV became an international showcase for Alsthom and SNCF. Then there was the high-speed line to the Mediterranean, connecting Montpellier and Marseille (2001), the ‘TGV-Est line’, linking Paris to Strasbourg from 2007 and the TGV Rhin-Rhône, inaugurated in 2011 between the south of Belfort and the Dijon area. Finally, the Tours-Bordeaux line and branches to Rennes, also known as the “LGV L’Océane” by the SNCF, were inaugurated in July 2017.

Alstom has tried to sell this product worldwide, with more mixed success than expected. South Korea, Spain, Italy (in the form of an AGV) and Morocco are the only countries to have bought the articulated TGV “à la française”.

When we look at the TGV map today, we can see that the SNCF has taken up the old idea of what is known in France as the “Étoile de Legrand” (Legrand hub-and-spoke), i.e. a network entirely centered on Paris. The culture of a strong capital city that connects the “provincial cities” remains alive in the country. The SNCF considered – and still considers – that the Parisian flows are economically the most promising.

The PSE trainsets (Paris Sud-Est), which had become obsolete over time with their DC motors, finally left the railway scene only after 35 years of service, demonstrating the technical success of this highly innovative train in 1981. The 40 years of high-speed rail have shown the undeniable success of the French TGV, which has remained faithful to the technical design of the articulated train, with nearly 400 trainsets in service today. Alstom’s next series of TGV-M trains will renew the articulated train concept and the SNCF has ordered nearly 100 trainsets. Happy birthday, TGV.