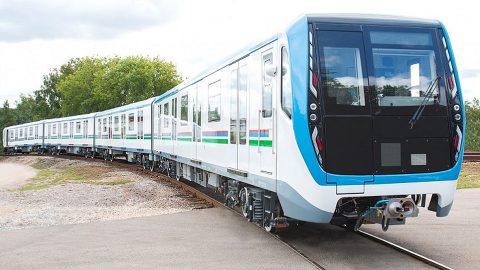 Uzbek public transport company Toshkent Metropoliteni has received five new metro trains of 81-765 type. The four-car vehicles were produced and delivered by Russian manufacturer Metrovagonmash. In the coming future, 45 more metro trains of this type will be ordered to run on the new extensions and lines of Tashkent Metro.

The delivery was performed in accordance with the contract concluded in October 2018. Metrovagonmash, a part of Transmashholding, assembled the first vehicle for Tashkent Metro in July. The entire batch has been shipped to Uzbekistan on 19 September. In 10 days the trainsets were delivered to Tashkent. These vehicles are the initial order of Toshkent Metropoliteni, it intends to purchase 45 more units of 81-765 type.

“By the year’s end, it is planned to complete the construction of the Yunusobod and Sirghali metro lines, as well as to launch the first stage of the construction of the Circle Line. To operate the rolling stock on the new lines of Tashkent Metro which are under construction, Oʻzbekiston Temir Yoʻllari (Uzbekistan Railways, it owns Toshkent Metropoliteni – RailTech) signed the contract with Russian manufacturer Metrovagonmash for purchasing the first batch of five four-car trainsets for the elevated metro line in Tashkent. Totally, it is planned to purchase over 45 such trains in the future,” said Oybek Hudoyqulov, chairman of Toshkent Metropoliteni.

Metrovagonmash is developing the 81-765 type since 2016. Tashkent became the third city to operate the metro trains of 81-765 type. Currently, they run in Moscow and Baku. The trainsets of the 81-765 type are the newest in Tashkent Metro. Since 1980 it is operating the 81-717/714 trainsets, the most popular vehicles in the capital of Uzbekistan. They were produced in the Soviet period by Mytishchi Machine Works, a predecessor of Metrovagonmash. The other type used in Tashkent is the 81-718/719 trains. They were ordered and supplied in 2001. Besides Tashkent, this type runs only in Kharkiv Metro, Ukraine.

Toshkent Metropoliteni and its parent company are providing the works to construct the new line and extend the existing one. Sirghali Line with six stations will be launched this year or in early 2020 in the western neighbourhoods of Tashkent. The extension of Yunusobod Line covers two underground stations to be open by the year’s end. Moreover, the other new route, known as Circle Line will be completely elevated and encircle the city of Tashkent. This route will have a length of over 52 kilometres and, therefore, be the longest line of Tashkent Metro. The construction works on Circle Line are scheduled to start this year.