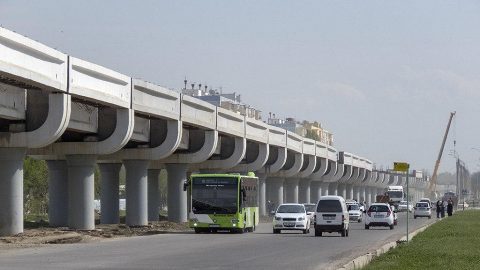 Tashkent Metro will be extended with two elevated lines

Tashkent Metro is being vigorously developed. Two elevated lines with a total length of 18 kilometres are scheduled to be launched this year and in 2020. Also, the construction of the 2.9-kilometre underground section is finalising now.

The first elevated route is the Circle Line. The first phase of this route is scheduled to be opened this year. It has a length of 11 kilometres and 7 stations. The section will be interconnected with the Oʻzbekiston Line. The development of the Circle Line provides the increase of its length up to 52.1 kilometres and the number of stations up to 35. This route will become the longest in Tashkent by encircling the city.

The other elevated route is the Sirghali Line. The construction works started in November 2016. The project costs more than 72 million Euros. It will connect the southwestern neighbourhoods of Tashkent with the Chilonzor Line, the longest underground line in the city. The 7.1-kilometre section will be launched in 2020 and have six stations. In the future, the route will be prolonged northwards and be linked with the Oʻzbekiston Line in the western part of Tashkent.

Today, Tashkent Metro consists of three lines and 29 stations. The entire network has 36.2 kilometres long. The metro system was launched in 1977. The latest extension was opened in 2001 by opening the Yunusobod Line.