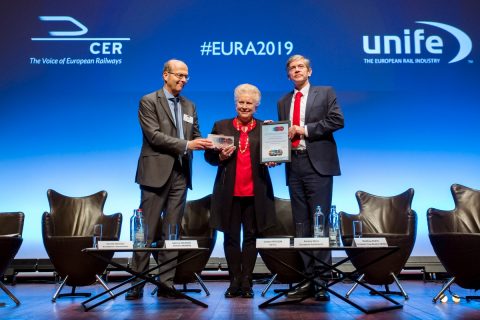 Catherine Trautmann, coordinator of the TEN-T North Sea-Baltic rail corridor, has won the European Railway Award on Wednesday in Brussels. She also received a check of 10 thousand Euros. Trautmann plans to donate the sum to the European Disability Forum, an organisation making public transport more accessible for disabled people.

“We need to create an accessible city for disabled people. There is still a large group of people who are not served well by public transport”, Catherine Trautmann said. The European Disability Forum represents the interests of 80 million Europeans with physical disabilities.

Catherine Trautmann was appointed as a coordinator of the North Sea-Baltic rail corridor in October 2014. The main project of the corridor, which links the ports of the Baltic Sea (Klaipeda, Riga and Tallinn) and North Sea (Rotterdam, Antwerp and Hamburg) is Rail Baltica. This new railway line will connect Estonia, Lithuania, Latvia and Finland with other EU countries by a standard gauge railway.

“The goal of Rail Baltica is to reduce the distance between people. We want to make people in Eastern Europe feel equal to Western Europeans. We want to make sure that young people have a future prospective in the country where they live”, Catherine Trautmann said at the awards ceremony.