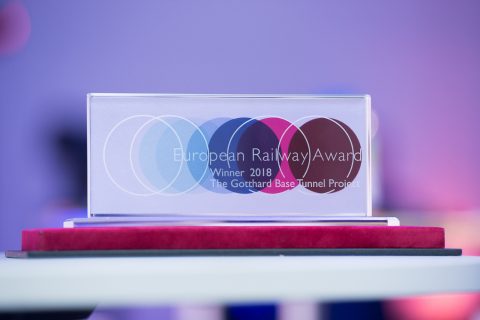 The European Railway Award is now accepting the nominations of candidates for the 12th edition of the award. The ceremony will take place at the beginning of 2019.

“We are looking for candidates who have made a real impact on the rail sector today”, European Railway Award Communication Manager Laura Henry said. “Whether it’s through a bold policy initiative, ingenious innovation or simply a new way of thinking and organising, we are searching for individuals and projects whose achievements can inspire the sector at EU-level and even pave the way for the future of rail.”

The 11th edition of the award was presented to the Gotthard Base Tunnel. “Not only was this a monumental technical achievement and political success delivering great results for the end users, it’s also a best case example from which many lessons can be learned”, Henry said. Built over 17 years and costing around 11 billion Euros, the twin-bore tunnel linking Italy with Switzerland and central Europe, is an ‘outstanding example of shifting freight transport to more environmentally friendly modes of transport, by relying on public support and a fair financing system’, the jury said.

Since 2007, organised by CER and UNIFE, the European Railway Award honours outstanding achievements in the development of sustainable rail transport in Europe. The aim is to show the recognition of the whole sector, from railway operators and infrastructure managers to rail supply companies, for the remarkable contributions that have benefitted and improved the railway mode across Europe.

The award comes with prize money, donated to a charity of the laureate’s choice. Nominations should be submitted by 31 May 2018. Eligible candidates will be shortlisted and put to a jury vote.