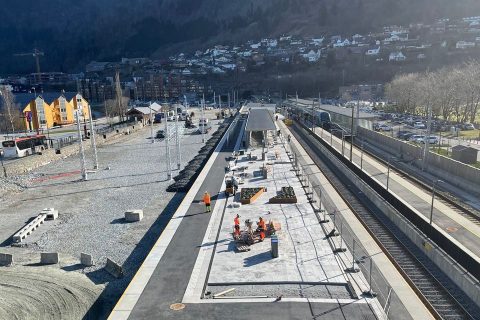 The Norwegian rail infrastructure manager Bane NOR will carry out extensive track works on the Bergen line in the coming week in preparation for the new signalling system ERTMS. The company will also be replacing track components.

Between Bergen and Voss, the works will take place during the day in the last week of April outside rush hour. On the weekend of May 1, there will be work between Bergen station and Gol.

At the stations in Arna, Dale and Evanger, Bane NOR will do an extensive reconstruction of the line. Furthermore, various inspections and maintenance work on the railway line are planned. In between, a switch and interchange at Ål station will be removed and replaced. This is to prevent mistakes and unexpected train stops later in the year.

Bane NOR is modernising the railway with digital signalling system ERTMS. By going from analogue to digital, more trains will be able to run on the route, and fewer delays for passengers and goods are expected. The new system will be taken into use on the Bergen line in 2023.

Work will be done to prepare ERTMS at the stations at Dale, Evanger and Ål. At Ål, there will also be major track alterations throughout the week. Furthermore, new drive motors will be installed in switches at all three stations.

Norway is installing ERTMS Level 2, meaning all data communication between the signalling system and the trains takes place via digital GSM-R radio. The communication takes place between a radio block center and the trains’ ETCS computer. Bane NOR was named a winner of the European Railway Award 2022 for the work on the new digital signaling system ERTMS, which they have planend to roll out on the whole railway network by 2034.