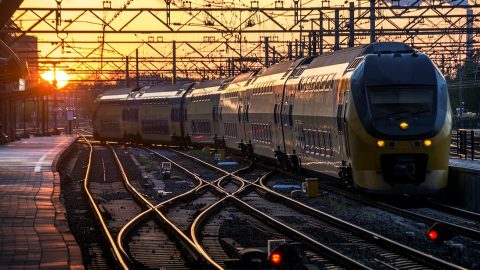 Slower trains do not reduce vibrations

The lower speed of passenger trains does not reduce the vibrations near level crossings. This was concluded by Dutch rail infrastructure manager ProRail and national railway operator NS after three-month tests in the province of North Brabant. ProRail intends to examine other solutions regarding the reduction of the vibrations.

ProRail and Nederlandse Spoorwegen (NS) launched the joint investigation on request of the Ministry of Infrastructure and Water Management of the Netherlands. Since the mid-December 2019, NS partially slowed its Intercity trains serving The Hague – Eindhoven route. They have been running on the Breda – Boxtel section in North Brabant at a speed 115 kilometres per hour instead of the regular 130 – 140 kilometres per hour.

The main goal of the experiment is to review whether speed impacts on the level of vibrations or not. “Unfortunately, the results of this vibration study and a survey among local residents do not give sufficient results to continue driving at a reduced speed. We regret that this measure did not produce the desired result,” ProRail summed up. Therefore, NS will change its schedule in the following weeks. Its trains will start to run at a regular speed from June 2020.

In the coming period, ProRail intends to test other solutions for reducing vibrations. Among other things, the Dutch rail infrastructure manager plans install so-called under sleeper pads (USPs) on a track section near Oisterwijk that is also located on the Breda – Boxtel line. Earlier, the acid rubber mats should have been deployed in the mid-April but this term has been postponed due to coronavirus. Now, ProRail is defining the new date. It is reported that this trial could be launched until the year’s end.

Another possible solution is to spray foam between the crushed stones of track ballast. There had been planned to spray Durflex, a special type of foam, near Oisterwijk. Because of the coronavirus outbreak, ProRail has also been forced to delay this project. “We also want to carry out this test this year,” the Dutch rail infrastructure manager stated. In addition, ProRail intends to install a new type of the concrete level crossing in Dorst, close to Breda. This experiment is scheduled for early 2021.

The title of the article is factual incorrect. Quote ProRail: ” […] do not give sufficient results […] “. So the speed reduction was not enough to reach the intended goal. That’s something else than ‘no reduction’. Ofcourse speed reduction reduces vibrations: that’s basic physics.

It would have been more logical to reduce the speed of the problematic TRAXX-MS-loc to 100 km/h. But the whole logic behind seems more political than scientifical…