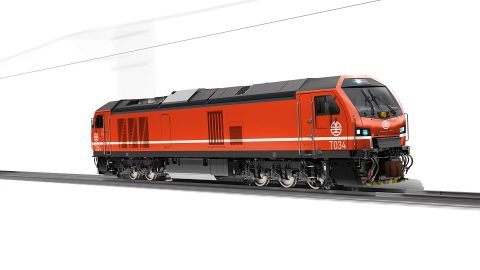 Stadler Rail will supply 34 diesel-electric locomotives to Taiwan. It is the first large contract for the Swiss rolling stock manufacturer in the Pacific region. The vehicles will be produced at the Stadler’s plant in Valencia, Spain.

Taiwan Railways Administration (TRA), the railway operator on the island country, purchases 34 locomotives within the fleet renewal programme. The ordered vehicles are worth at around 165 million Euros. TRA intends to operate the Stadler’s locomotives in order to provide both passenger and freight operations. “We are proud to be able to supply a larger rolling stock series to Asia for the first time. The locomotives will be used in demanding mountainous topography – similar to that of Switzerland – and in extreme climatic conditions,” said Thomas Ahlburg, Group CEO of Stadler Rail.

The locomotives ordered by TRA will be six-axle and will be equipped with a Cummins diesel engine with an output of 2,700 horsepower. They will be able to start with a tractive effort of up to 430 kilonewtons and speed up to 120 kilometres per hour. Also, they are able to run in multiple-unit train control.

Besides the mountainous topography, Stadler Rail will also adapt the locomotives for the tropical and subtropical climate in Taiwan with high humidity of up to 100 per cent and extreme temperatures of up to 45 degrees Celsius. The vehicles will be designed for the narrow gauge of 1,067 millimetres that is common in most of the island railway network.

The deal with TRA is the second success story of Stadler in the Pacific region within a short time. Three weeks ago the Swiss company announced the establishment of the first joint venture in the region. It will be established together with an Indonesian partner PT Inka. Both partners intend to produce 500 suburban rail carriages at the new facility. An option for a further 500 units could be also secured for the joint venture. Moreover, the Indonesian plant will also assemble and commission the rail vehicles.