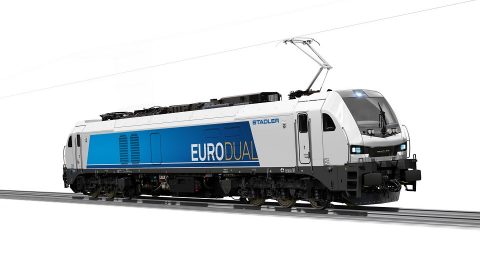 Stadler Rail has obtained the first order in Turkey. The Swiss company will deliver seven hybrid locomotives of the EURODUAL type to the Turkish rail freight operator Körfez Ulaştırma. The first vehicle will be supplied to Turkey by 2021.

For Turkey, the EURODUAL locomotives will be the first dual-mode vehicles being operated on the country’s railway network. The new type of rolling stock will be able to run on both electrified and non-electrified lines. It boasts a power range of 2.8 megawatts in diesel-electric operation and 6.15 megawatts in electric catenary operation, as well as an outstanding tractive effort of up to 500 kilonewtons, thanks to six-powered axles and a state-of-the-art adhesion control system. The EURODUAL vehicles will be used by Körfez Ulaştırma as a single locomotive to haul the freight trains with a weight of up to 2,000 tonnes.

The agreement also provides the eight-year period of full-service maintenance. The EURODUAL locomotives are manufactured by Stadler Valencia, a Spain-based subsidiary of Stadler Rail and a former participant of Vossloh Group. Turkey will become the fourth country to operate the EURODUAL locomotives. Three others are the United Kingdom (Direct Rail Services), South Africa (PRASA) and Germany (Havelländische Eisenbahnen).

In September 2018 Körfez Ulaştırma ordered five PowerHaul diesel locomotives from General Electric. The vehicles will be manufactured in Turkey at the facilities of Tülomsaş, the local partner of General Electric. The company has become the second operator of this type in Turkey. Since 2013, the PowerHaul locomotives are being used by the state-owned railway operator TCDD Tașimacilik. Besides Turkey, this type is operated in the United Kingdom, South Korea and Australia.

Körfez Ulaştırma is the first private rail freight operator in Turkey. The company got the license in July 2017 but started operations at the end of the same year. Initially, Körfez Ulaştırma rented the locomotives of state-owned railway operator TCDD Tașimacilik. Afterwards, it focused on purchasing new vehicles. Körfez Ulaştırma is a part by Tüpraş, the largest refinery holding in Turkey. The latter owns refineries in Izmit and Kirikkale. Therefore, the rail freight carrier carries mostly oil and petroleum products on the Kirikkale – Ankara – Izmit railway line in northwestern Turkey.