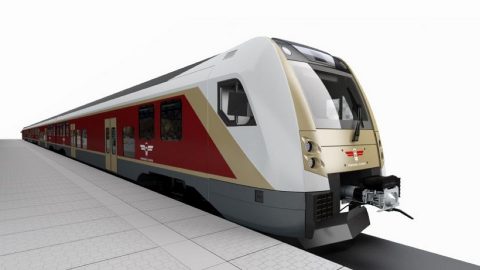 Škoda Vagonka, a member of Škoda Transportation Group, has won a procurement for the supply of 32 electric trains to Latvia. The agreement between the Czech manufacturer and the Latvian passenger rail operator Pasažieru vilciens was signed on Tuesday, 30 July. The ordered electric multiple units cost around 242 million Euros, they will be delivered in 2022 and 2023.

With the help of the new trains, Pasažieru vilciens intends to increase its capacity. According to the company’s CEO Jānis Grigulis, the rail operator plans boost the passenger traffic from the current level of 18 million passengers up to 25 million passengers. Each vehicle will have a seating capacity for carrying at least 400 passengers. The new trains will be able to speed up 160 kilometres per hour. Škoda Vagonka is also obliged to provide the maintenance of rolling stock during the 35-year lifespan. To this end, the Czech company will cooperate with the local companies.

Pasažieru vilciens is trying to purchase 32 electric trains since the end of the 2000s. Two unsuccessful efforts were made in 2011 and 2014. Last year, the company announced the procurement for the third time. Four rolling manufacturers participated in the bidding process: Talgo, CAF, the Polish subsidiary of Stadler, and Škoda Vagonka. In November 2018 Talgo was declared as a winner. Afterwards, two other participants, CAF and Škoda Vagonka submitted a complaint against the unfair proceeding. Therefore, the Talgo’s victory was cancelled and the procurement was again announced from the outset.

Pasažieru vilciens is a state-owned rail company that operates the domestic passenger trains inside Latvia. The company’s fleet consists of old electric and diesel trains produced by Riga Carriage Building Factory (RVR) from between 1960-1990. In the 2000s, these vehicles were retrofitted. The international trains from Latvia to the nearby countries are operated by the foreign railway companies or the national rail operator Latvijas Dzelzceļš (LDz).