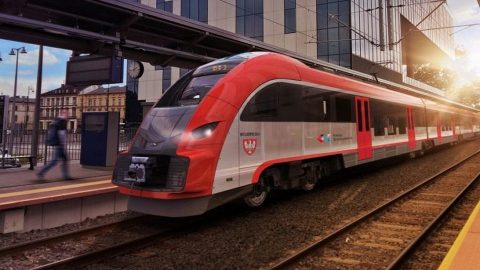 Greater Poland province has ordered five new electric trains for the Poznań Metropolitan Railway – a commuter rail service in the metropolitan area of Poznań. The five-car units of the Elf 2 type will be delivered by Polish rolling stock manufacturer Pesa in June-December 2020.

The delivery of five new trains costs 127.3 million Zlotys (around 29.4 million Euros). Of this amount, 48.75 million Zlotys (circa 11.3 million Euros) were allocated from EU funds. The new vehicles will serve the Opalenica–Poznań–Września commuter line. Each train will be equipped with 240 seats, five ticket onboard ticket machines, two toilets, air-conditioning, Wi-Fi network, passenger information system, special areas for wheelchairs and bikes. The units will speed up to 160 kilometres per hour.

The Poznań Metropolitan Railway was launched by the government of Greater Poland province in June 2018. The new service is similar to the S-Bahn connections in German cities. It combines both urban and suburban rail links. The Poznan Metropolitan Railway has three lines: Poznań–Opalenica-Nowy Tomyśl, Grodzisk Wielkopolski-Poznań–Wągrowiec and Poznań–Jarocin.

By 2021, these routes will be extended to Września and Wronki stations. Also, the Kościan–Poznań–Gniezno and Rogoźno–Poznań–Swarzędz new routes will be added. All the lines are served by Koleje Wielkopolskie (Greater Poland Railways), a regional passenger rail operator established by Wielkopolska province in 2010.

Pesa has been developing the Elf train family since 2010. The manufacturer has supplied more than one hundred Elf units to five Polish rail operators. Koleje Wielkopolskie operates 22 four-car units of the Elf type. They were delivered in 2012-2014. In August 2017, the operator purchased 10 five-car trains of the Elf 2 type. They are scheduled to deliver this year. The Elf 2 type is an upgraded version of the Elf trains. The new trains are more comfortable for passengers, equipped with ERTMS Level 2 and compatible with TSI 2014.