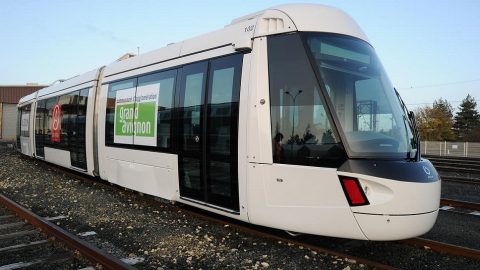 The French agglomeration community Grand Avignon has received the first Citadis X05 tram produced by Alstom. The vehicle will start trial rides in January. The first regular trip is scheduled for June 2019, when the tramway system is launched in the Avignon agglomeration.

The first Citadis X05 tram was delivered to Avignon and made a three-day journey from La Rochelle, where it was assembled. “Alstom and its teams are proud to present this first tram which addresses the major transport issues of the Agglomeration Community of Grand Avignon”, President of Alstom in France Jean-Baptiste Eyméoud noted. In total, the manufacturer should supply 14 trams to Avignon: another nine vehicles will be delivered in 2019 and four units later, by 2023.

The three-car vehicle is 24 metres long and is equipped with four double doors on each side. The capacity of Citadis X05 is more than 140 passengers. The new tram is recyclable for 98 per cent. It can speed up to 70 kilometres per hour. Seven Alstom’s production facilities in France participated in the Citadis X05 manufacture for Avignon. The main one was the La Rochelle site, where the tram was designed and assembled. Alstom has already supplied more than 2,600 Citadis trams to more than 50 cities around the world. Besides Avignon, two other French cities, Nice and Caen, ordered the Citadis X05 trams.

Currently, Avignon has no tram network. It will become the first French city to receive its tram system since 2014, when trams were launched in Aubagne and Besançon. The tram system is expected to be relaunched in June 2019 after the 87-year break. Initially, the Avignon tram system will have a single 5.2-kilometre line with ten stops. By 2023, the second 3.2-kilometre route will be added, while the first line will be extended. Moreover, some other lines are also planned.