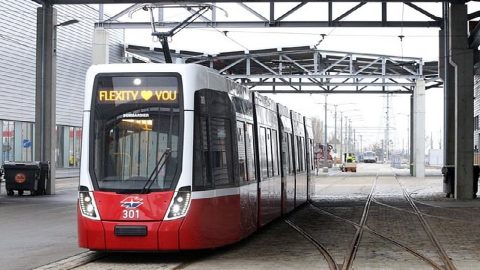 A Flexity low-floor tram produced by Bombardier Transportation made a first regular trip on the streets of Vienna. The vehicle got access for operations after extensive testing for a year. Flexity trams will replace the high-floor units operated by the city public transport company Wiener Linien.

The five-car tram ran on the 67 route, carrying ordinary passengers and some officials, including chairman of Wiener Linien Günter Steinbauer and Executive City Councillor Ulli Sima. “With Flexity, we can bring the Viennese people an early Christmas gift. The new trams will continually replace the high-floor sets,” the city official said on 6 December during the trip. By 2025, the number of Flexity trams in Vienna will reach 119 units.

Wiener Linien has signed a contract with Bombardier Transportation for supplying 119 Flexity trams. The 562-million Euros deal has an option for an additional 37 units. The agreement also includes a 24-year maintenance period. Bombardier started producing trams for Vienna in 2016. The first unit was delivered to the capital of Austria by the end of 2017 and from the beginning of 2018, it was being tested on the city streets.

The 34-meter Flexity trams are capable of carrying 211 passengers. The units are suitable for disabled people. The vehicles have air-conditioning and video surveillance as well as a passenger information system that is displayed in every car. A driver cab is equipped with an intelligent touchscreen desk.