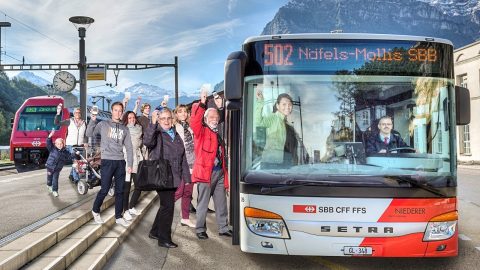 The European rail sector is experiencing a renaissance, especially in passenger transportation. While the rail infrastructure managers improve the state of the network, the railway operators upgrade their fleet, improve train schedule, offer new connections and onboard services in order to attract passengers. But that’s not all. More and more services provided by the railway operators include journeys by other modes of mobilities, besides a train, or few of them simultaneously.

Among the latest developments are the e-scooters offered by SBB to its customers. In major European cities, electric kick scooters are the new trend in mobility. They became a real headache for the city authorities. There are a lot of discussions on this innovative but dangerous, as its critics believe, mode of mobility. Someone tries to regulate their usage, others intend to ban them. However, it would be silly to reject the convenience of e-scooters. Obviously, the latter feature has stimulated SBB in a partnership with Circ to launch new service at six train stations. As a result, its customers are able to continue their journey after taking off the train.

Cars have been the worst enemies of trains for quite a while. Two past decades revealed the opportunities for cooperation and synergy, especially in door-to-door connections. Thus, in 2001 Deutsche Bahn (DB) launched the carsharing service. Initially, it was branded as DB Carsharing, later the name was changed to Flinkster. This option is provided by DB together with its partners Stadtmobil and Cambio CarSharing. The passengers are able to rent the cars directly at a train station to continue their travel. Now, carsharing is being offered by various railway operators across Europe, including both state-owned (SBB or ÖBB) and private (RegioJet or Leo Express) ones.

In the past decade, more and more railway operators try to offer not only conventional, petrol or diesel, cars but electric vehicles too. The above-mentioned railway company SBB included electric vehicles in its carsharing fleet in September 2011. Currently, electric cars are offered for sharing by other operators. Thus, ÖBB recently extended the network of carsharing locations with electric vehicles.

As in the case of cars, the railway companies had a very similar relationship with buses. In spite of all tensions and competition, the relationship between them also changed in the past two decades. In 2003 Austrian Federal Railways (ÖBB) acquired Österreichische Postbus, a former bus division of the Austrian postal provider Österreichische Post. Postbus connects rural areas with major cities and important railway stations. Besides Postbus, ÖBB also provides Intercitybus, a regular service between major cities in the south of Austria. The option was open in October 2007 to link Graz and Klagenfurt. Afterwards, it was extended to Villach and even to neighbouring Italian cities of Udine, Trieste and Venice. Both Postbus and Intercitybus provide good opportunities for the passengers to take the ÖBB’s trains. The same bus services are provided by Deutsche Bahn (IC Bus, Arriva), SNCF (iDBUS). SBB does not own a bus subsidiary but has a strong partnership with Postbus Switzerland, the Swiss bus operator.

For newly-born open-access operators, buses mean even more. Sometimes they were the first mode to carry passengers while trains appeared with the development of business. Thus, the Czech company RegioJet initially transported passengers by buses and later launched a train service. Now, buses are a significant tool for RegioJet to expand its route network to other countries where it faces obstacles. Another Czech open-access operator Leo Express does in the same way and provides the mixed offer. Its passengers are able to travel by bus to the railway stations and then continue the journey by train. Bus services of RegioJet and Leo Express stimulate the state-owned company České dráhy to launch its own bus operations.

Another mode of mobility offered by railway operators is a bicycle. Dutch railway company Nederlandse Spoorwegen (NS) started the OV-fiets programme, a bike-sharing service. The sharing locations are situated at the train stations throughout the Netherlands. As a result, NS customers can easily travel to or from the train station.

Moreover, the passengers across Europe can take their bicycles onboard and carry inside the trains. This option has become almost compulsory for railway operators. Some of them even launch international service for cyclists. For those, who have their own bicycle and do not want to take onboard, the railway companies offer many parking areas. A lot of two-wheelers having parked in the vicinity of train stations are the ordinary landscapes for the Netherlands. Other European countries are also moving towards the development of bicycle infrastructure at the train stations.

All the mobilities mentioned above are dealt with ground transportation. But it does not mean that the railway operators could be restricted by them. The recent decision of KLM to replace its flights between Amsterdam and Brussels with high-speed trains proves that the rail sector and aviation have points of convergence and thereby options for cooperation and multimodal solutions.

By the way, three years ago Polish government intended to merge the national long-distance railway operator PKP Intercity with national airline LOT. After several discussions, the initiative was recognised as unreasonable. Who knows, maybe, in the coming future, we will see the opposite decisions and the railway operators could turn into multimodal door-to-door providers not only on the ground but in the air too.