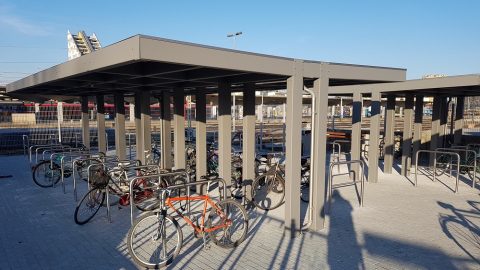 Slovenia to set up bicycle parking at all train stations

Slovenian railway operator Slovenske železnice (SŽ) plans to make the country’s train stations more convenient for cyclists. The national company plans to set up free bicycle parking at all 220 stations and stops. The project will be financed by the Ministry of the Environment and Spatial Planning of Slovenia.

The pilot parking for bicycles was arranged at the country’s main train station in Ljubljana. It is situated close to the station building and has the capacity to store 244 bikes. The bicycle parking has a covered section for 96 single-track vehicles. This section is also equipped with wheel repair tools and pumps.

The entire bicycle area is protected with a video surveillance system. The Ljubljana project was financed by the Ministry of Transport of Slovenia and was implemented by SŽ-Infrastruktura, an infrastructure division of Slovenske železnice.

Promotion of the cycling is a part of Slovenia’s Strategy for the Development of Transport to 2030 adopted by the country’s government. It includes the construction of new cycling routes and support infrastructure across Slovenia. One of the measures is the installation of charging stations for electric bicycles. Slovenia intends to reduce emissions by 15 per cent by 2030.