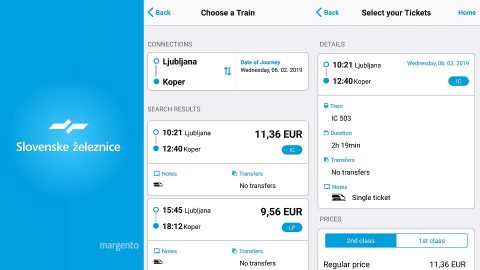 Slovenian national railway operator Slovenske železnice (SŽ) has launched a mobile application for ticket purchase. The programme is available for installation on devices using both Android and iOS operating systems.

The mobile application ‘Grem z vlakom’ (translated as ‘I go by train’) was launched on 29 January. Initially, it became available for users of Google Play service (Android) while the customers of App Store (iOS) started to use it two days later. The application allows passengers to search train schedules, choose and buy various types of tickets (regular, for children 6 to 12 years or up to 6 years), validate a ticket onboard and look through active or archived tickets. The customers can use two languages – Slovenian or English.

Besides the mobile application, SŽ intends to install ticket machines across Slovenia. The first device is expected to be installed by the year’s end. The rail operator plans to acquire 187 ticket machines that cover 90 per cent of railway stations in Slovenia.

The passenger trains in Slovenia are operated by SŽ-Potniški promet, a subsidiary of Slovenske železnice. The company carried more than 13.4 million passengers in 2017, 94 per cent of them domestically. Only 0.8 million passengers used trains to travel abroad. The average train trip inside Slovenia was 41.7 kilometres, while the international journey was 150.9 kilometres.