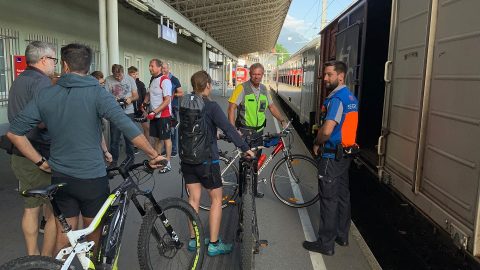 Austrian Federal Railways (ÖBB) has launched a new service for cycling enthusiasts. The rail company has added a special wagon for carrying bicycles on the cross-border routes from Villach to Jesenice, Slovenia, and Tarvisio, Italy. The service will be available until 8 September.

The cycling wagon is marked with a special ‘bicycle’ sign. It has a capacity for transportation of 120 bicycles. The new service was organised by ÖBB together with touristic companies that provide cycling tours to the beautiful mountainous cross-border region. Passengers travelling with a bicycle can use the new option four times a day but only on Saturdays, Sundays and public holidays. The trains on the Villach – Jesenice and Villach – Tarvisio routes run only in the summertime, from 8 June till 8 September.

The connections from Villach to Jesenice and Tarvisio is a part of S-Bahn Kärnten network operated by ÖBB. The service encompasses the entire state of Carinthia (Kärnten in German). ÖBB opened S-Bahn Kärnten in 2008 by launching the train service between Klagenfut, the capital of Carinthia, and Villach. Now this network consists of four routes: S1 (Lienz – Villach – Klagenfurt – Friesach), S2 (Rosenbach – Villach – Sankt Veit an der Glan), S3 (Weizelsdorf – Klagenfurt – Wolfsberg) and S4 (Villach – Arnoldstein – Hermagor). The summer links to Jesenice and Tarvisio are marked as S21 and S41 respectively.