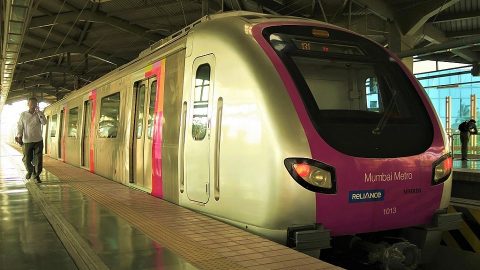 The Asian Development Bank (ADB) will give a loan of 926 million Dollars or around 818 million Euros to the government of India. The money will be allocated for the construction of two new lines in Mumbai Metro. They are expected to become operational by the end of 2022.

The ADB’s loan will help to extend the Mumbai Metro for almost 59 kilometres and for 52 stations. The estimated ridership of the new routes will be 2 million passengers per day. The 16.5-kilometre Line 7 will link the stations of Dahisar (East) and Andheri (East). The route will interconnect with the existing Line 1 at the Andheri station and with the planned Line 2 at the Dahisar station.

The majority of the loan will be allocated to construct two sections of Line 2, commonly known as Lines 2A and 2B. This route will be connected with several metro lines including the existing one as well as with Mumbai Monorail and rail suburban services. “ADB financing will ease travel for millions of commuters across Mumbai, help decongest heavily crowded suburban rail systems, and contribute to providing modern, clean, and livable urban environment to its citizens”, said Kenichi Yokoyama, Country Director of ADB’s India Resident Mission.

The Mumbai Metro was opened in June 2014. Now, it has the only 10.8-kilometre route between Ghatkopar railway station, in eastern Mumbai, and Versova neighbourhood, in the western part of the city. It is operated by Metro One Operation, a joint venture of Reliance Infrastructure (an Indian infrastructure investment company) and RATP Dev Transdev Asia (Hong Kong-based subsidiary of the French public transport operator Transdev). Line 1 has a daily ridership of 405 thousand passengers (June 2018). The development of the Mumbai Metro provides the construction of 11 new lines. The metro system will have a total length of 276 kilometres