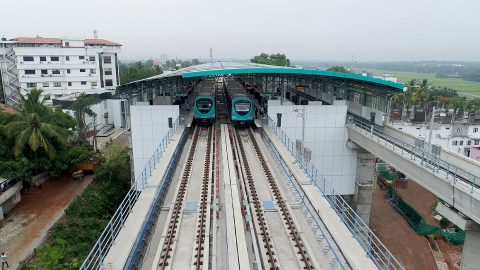 Alstom has won a new deal in India. The French technology company will install a power supply system on the 33-kilometre extension of the Bangalore Metro. The works will cost around 71 million Euros. The project will increase the use of metro by local inhabitants and reduce the traffic jams on the streets of Bangalore.

The contract includes engineering, supply, installation, testing and commissioning of the 750-Volt third-rail traction system with a direct current. Alstom also constructs 30 auxiliary substations (33kV/415V), 26 traction substations (33kV/750V DC) and a 33-kilovolt cable distribution network along the viaduct. The French company is obliged to integrate this new infrastructure with the existing one. The project implementation will be carried out in five stages. The first phase with a length of 6.5 kilometres will be launched by the year’s end.

The new deal is the second one between Alstom and Bangalore Metro Rail Corporation (BMRCL) that operates the city metro system. In 2009, the French supplier obtained a contract for the delivery of the U200 signalling and telecommunications solution for the 42-kilometre section of the Bangalore metro. The works were completed in 2017.

“The significance of our relationship with BMRCL, going back to 2009, is underlined by the fact that Bangalore hosts one of Alstom’s most significant sites. Alstom’s footprint in systems and infrastructure is growing rapidly, and this project will give us an opportunity to extend our cutting-edge capabilities and solutions to our customer,” Alstom Managing Director in India & South Asia Alain Spohr noted.