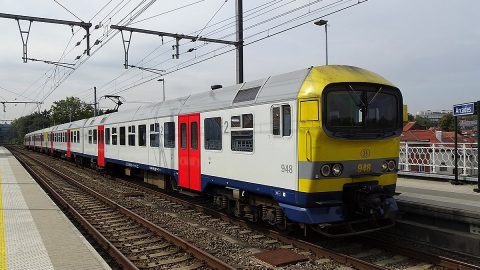 Trains without energy meters will be more expensive in Belgium

In 2020 Belgian rail infrastructure manager Infrabel will implement different tariffs: one for trains equipped with energy measuring devices and another for trains without. Railway undertakings will pay around 5 per cent more for vehicles without energy meters. Bart van der Spiegel, an expert in energy management at Infrabel, will give a presentation on this measure and other aspects of the energy policy on the Belgian railway network during the RailTech Europe conference in Utrecht, the Netherlands.

“From next year, we will differentiate the tariffs. Trains invoiced on the basis of energy measurements will pay 2 Euros per megawatt less. So it will be around 5 per cent more expensive to operate trains without meters”, Bart van der Spiegel said. According to him, this will stimulate railway companies to install the onboard Energy Measurement Systems (EMS) on their rolling stock. “We hope to be able to invoice next year half of the energy consumption based on measured consumptions”, the Infrabel’s expert noted.

Another aspect of the Belgian energy saving policy is traffic management. “Infrabel also wants to facilitate our railway undertakings in running more energy efficiently. Railway undertakings can easily double the advantage by driving more energy efficiently”, Bart van der Spiegel said. He also gave an example of Lineas, a Belgian rail freight operator, that reduced 15 per cent of energy consumption by heavy freight trains only by avoiding unplanned stops and by increasing the amount of regenerative braking.

Today, only around 50 locomotives are equipped with EMS. “They send the data from onboard measuring devices towards Erex, the joint Settlement we have together with the infrastructure managers of Switzerland, Netherlands, Denmark, Norway, Sweden and Finland”, the Infrabel manager said. The country’s largest train operator NMBS/SNCB is installing energy meters on their latest trainsets.

Usually, the electric trains and locomotives consume circa 1,350 gigawatts of electricity per year. According to 2018 data, 12,3 per cent of the energy was a share of freight traffic. “The energy consumption has remained stable since the start of this century”, Bart van der Spiegel concluded. At the same time, he noted that the amount of passengers has increased by more than 50 per cent in the same period.

On 27 March, Bart van der Spiegel will give a presentation ‘The last mile for Traction Energy Settlement’ during the international RailTech Europe conference. The programme can be found on the event website.