How a lighting innovation is changing European rail yards

With upcoming projects in France and the UK as well as a lot of interest from Germany, Switzerland, Austria and the rest of the world, RailLight is ready to fill the requirement for an energy efficient, sustainable light solution for railway sidings with minimal light pollution and CO2 emissions.

Initially, Dutch railways NS asked infrastructure manager ProRail to illuminate the rail yard in Lelystad more sustainably and in an improved way. There was no sufficient lighting on the yard in Lelystad, so personnel had to walk in the dark, which is not safe., said ProRail. When many light masts are placed however, the surroundings can experience much hindrance”.

To solve this, Dutch company Triolight came up with RailLight: a class 3 lighting fixture attached to the outside of the rails. The row of RailLights form an illuminated walkway so that train staff can see where to walk: the floodlight also accentuates unevenness and obstacles. The solution leads to a much lower chance of tripping and minimises light pollution to the surrounding area as the light does not shine upwards. RailLight has been installed on three Dutch yards in Lelystad, Roosendaal and Eindhoven.

The first trial in Lelystad, with 3 kilometres of illuminated walkways, has now been running for 3 years and the reactions have been very positive. It was used to determine the optimal distance between the lighting elements, to measure the quality of the lighting and to draw up a maintenance plan. It also investigated whether there are technical risks and if the fixture meets the required so-called IP and IK ratings.

Because this way of lighting a rail yard is completely new, RailLight was entered in the Innovation Awards at the digital event RailTech Europe 2021, last March. With the most votes from the public, the company won the Audience Choice Award. In addition to preventing light pollution, the RailLight also has a very low energy consumption and requires little maintenance.

One of the places where RailLight is already installed is the Dutch rail yard of Roosendaal. The existing light poles on the yard provided too little light on the inspection paths for the drivers who park the trains in the evening.

250 RailLights were installed on the side of the rails on behalf of Dutch Railways NS and infrastructure manager ProRail. The installation was carried out by Energie & Water Plus and complementary companies Flexcorail BV and Vest infra BV. 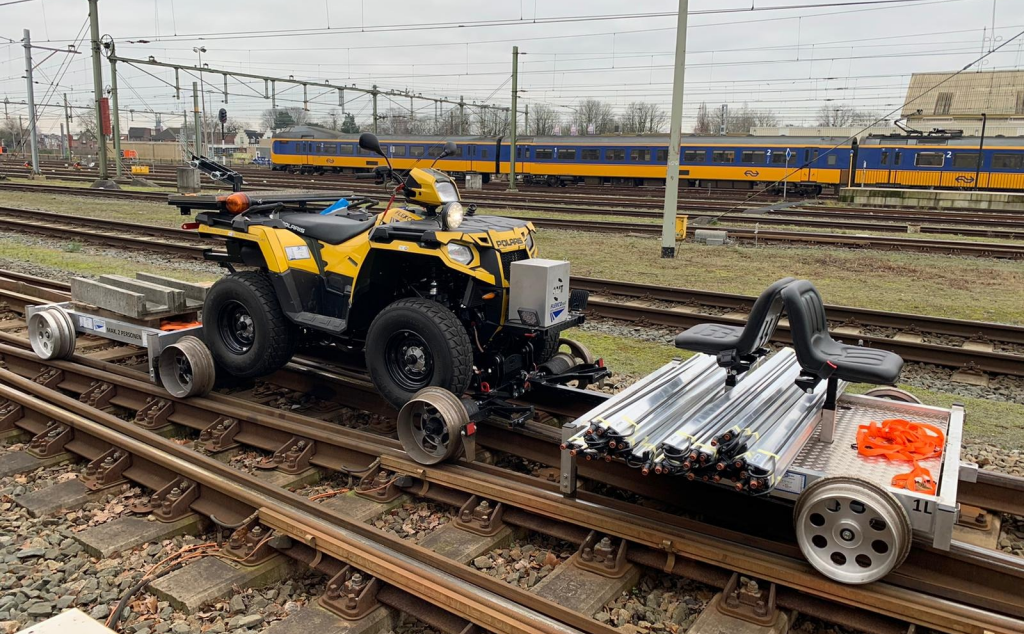 Given the complexity of the decommissioning of the yard, the distances were rather long for the supply and removal of the materials. The construction depot was also far from the work location. The materials were supplied with a land quad and trailer and then transported to the work location by Railquad. After the realisation of a temporary deployment site, the RailLights were installed quickly by just two people, without the use of heavy machinery or digging cables.