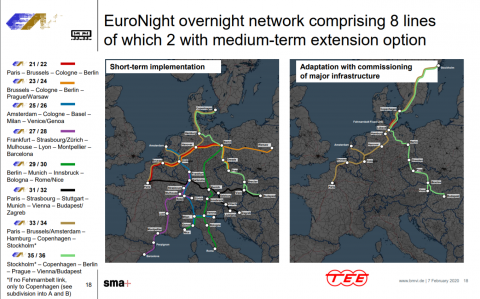 DB, ÖBB, SNCF and SBB are planning to re-introduce and operate new cross-border night train connections in Europe from 2021. These new connections are part of the Trans-Europ Express 2 network that is set to revive after 20 decades of silence. On Tuesday, the railway companies will sign a letter of intent for this cooperation.

The Trans-Europ Express (TEE) 2.0 is an updated network that was presented at the EU rail summer in September 2020 by Andreas Scheuer, German Transport Minister. The TEE 2.0 is set to connect European cities across the continent with a combination of High Speed and night trains without being a financial burden on the infrastructure. Additionally, it will place Europe’s rail transport in the spotlight as climate and environmentally friendly.

The Trans-Europ Express, founded in 1957, was an international railway service that operated in western and central Europe. It operated only first-class services compromising of 45 trains connecting 130 different cities. The idea was to operate fast and comfortable transnational trains that where mostly targeted at businessmen and sometimes regular travellers.

In the late 1970s and onwards, more of these TEE trains were replaced by trains that provided 2nd class services. Furthermore, business travellers chose air travel. DB decided to restructure the TEE network by introducing Intercity services, which replaced the TEE. Other European companies such as France’s SNCF with the TGV (high-speed trains) also came into play of reducing the TEE trains. By 1984, most TEE services were eliminated and the EuroCity (European inter-city rail network) was introduced.