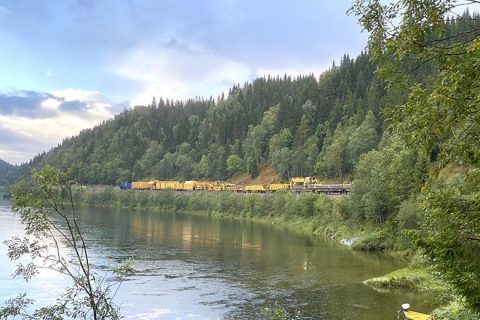 Bane NOR will invest a total of NOK 1.54 billion (145 million euros) for maintenance and ERTMS on the Nordlandsbanen line. It is the first line in Norway to implement the European standardized system for railway signaling and traffic control (ERTMS). The investment until 2022 will make it possible to increase freight operation on this line.

The Nordlandsbanen line is an important railway line in Norway, especially for freight traffic between the north and south of the country. It connects the Northern city of Bodø to Trondheim, and Norwegian railway infrastructure manager Bane NOR is doing important investments for the maintenance and modernisation of the line. The Nordlandsbanen also has significant local traffic between Trondheim and Steinkjer with hourly departures.

“We are in a very exciting and important three-year period for the railway in the region”, says Thor Brækkan, area director at Bane NOR. “Especially with regard to freight traffic and the great benefits this provides society in both sustainability and environmental benefits.”

Several long crossing tracks from Mo i Rana to Bodø are important for both current and future freight transport on the Nordlandsbanen. The line has freight terminals in Mosjøen, Mo i Rana, Fauske and Bodø. About 80 percent of freight traffic between Trondheim and Bodø currently goes via this line. “We can run longer trains more frequently”, says Brækkan, knowing that CargoNet, the primary operator of freight trains in Norway, has already increased its frequency by one freight train a day. In Fauske, the freight terminal is being expanded for NOK 150 million, and there will be longer crossing tracks.

Development of long crossings and the introduction of ERTMS are also important for passenger traffic. In addition, a new main platform in Bodø will be realised and an extension of the intermediate platform in Fauske. Renewals and investments will also be made that will make the Nordlandsbanen more robust against landslides and floods. The track conversion train will be in action in several places on the line in the coming years, and the sleeper change here will be NOK 255 million.

The realisation of ERTMS on the Nordlandsbanen will cost NOK 450 million (42.4 million euros) in the upcoming three years, and NOK 570 (53.7 million euros) million in total. The rollout of ERTMS will be done by Siemens Mobility, a contract with Bane NOR was signed in 2018. By 2034, the German supplier is obliged to roll out its technology on the entire Norwegian rail network that includes 4,200 kilometres of track and more than 350 stations. In the map below is an overview of the planned implementation of ERTMS.

Siemens Mobility has also equipped Campus Nyland, a training and signalling simulation centre. This facility was specially established to test the digital signalling technology on the Roa-Hønefoss line. Besides Bane NOR, Norway’s rail infrastructure manager, the centre is be available for suppliers that participate in the ERTMS programme including Alstom, Siemens, and Thales.