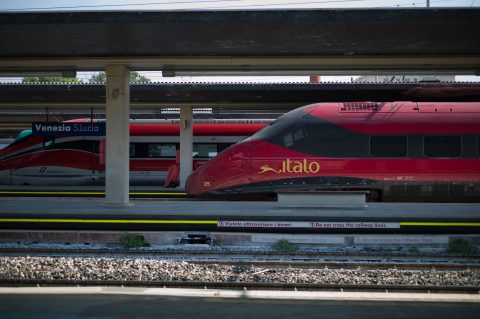 In Italy, railway company Alstom is working on implementing High Density ERTMS Level 2 in the urban area of Rome. According to a capacity simulation, the number of trains on the Italian tracks can be increased with at least 50 percent, says Stefano Baglivo, ERTMS Technical Advisor at Alstom. With the system, the capacity can be increased while still making use of the existing track infrastructure.

The current implementation of train safety system ERTMS High Density Level 2 is an ongoing project, which Alstom has been working on since the end of 2019. It is one of many ERTMS projects the railway company has executed so far. Alstom also managed the deployment of the revenue service for the first Level 2 lines in Europe. In 2005 the first ERTMS high-speed line in Italy Rome-Naples went into service, and later several ERTMS lines in Spain, Belgium, the UK and the Netherlands.

Stefano Baglivo, ERTMS Technical Advisor at Alstom, participated as ETCS discipline leader and engineering team leader for the Italian high-speed line, as well as for the line Bologna-Florence, which is almost fully extended in tunnels. Baglivo will talk about the Alstom experience in Italy of implementing ERTMS Level 2 with Hybrid Level 3 concepts on the RailTech Infra Forum 2020. “With this system, we can improve the performance and increase the capacity of the lines, without managing a critical upgrade of the existing track lay-out and signalling system.”

Both approaches, High Density ERTMS and Hybrid Level 3, are based on the same concept of virtual sectioning. The Radio Block Center (RBC) manages the virtual sections based on the real track detection devices, as well as on the position reported by the train, combined called the safe Train Integrity information. The High Density ERTMS system is overlapping the existing signalling system in Italy, ATP. It allows mixed traffic, both trains with ERTMS and a Train Integrity Monitoring System (TIMS), who can send information about the trains integrity, and trains only fitted with the ATP system can use the same track, Baglivo explains. The rollout of the project in Italy is planned in three phases, the first phase is expected by the end of 2022.

Implementing High Density ERTMS on the lines demonstrates a significant increase in capacity of trains. Baglivo: “We have performed a capacity simulation on the railway node of Rome, as well as on other trajectories. The goal was to understand if and how much High Density ERTMS together with virtual sectioning could improve the capacity of the line and how much. We have demonstrated this system is able to reach a duplication of the number of trains per hour on any part of the line, even in the peak hour between 5:00 and 6:00 pm.”

Baglivo emphasises that this capacity increase is not just the case for one lucky example, the simulation is done on every part of the line with several simulations. Also, the outcomes are calculated using four different types of splitting the sections into virtual blocks. In any selected case, the conclusion is the same, that there is at least a capacity increase of 50 percent, in some cases even more. “If the track lay-out is not changed, as is the case in Italy with the existing ATP signalling system, it is always possible to optimise the capacity by splitting the physical sections into several virtual sections”, says Baglivo.

“The project is challenging as this is the first project for Alstom in Italy using High Density ERTMS to enter revenue service”, says Baglivo. “Next to that, it is planned for quite a short period of time, in less than two years.” Currently, no trains in Italy yet are fitted with a Train Integrity Monitoring system set to revenue service. This is also a part of the project, Alstom is a supplier of onboard ETCS systems as well, and is currently cooperating with railway undertaking Trenitalia on how to implement the TIMS on board of some types of trains. Stefano Baglivo: “In Italy there is high pressure from infrastructure managers to owners of train fleets to manage the upgrade of trains to ERTMS Baseline 3 Release 2 with a TIM system as soon as possible.”

Interested in learning more about ERTMS implementations and the future of connected rail? Stefano Baglivo is one of the experts who will give his view during the Railtech Infra Forum on 28 and 29 October 2020. Here you can find more information about the programme and register for this online event.