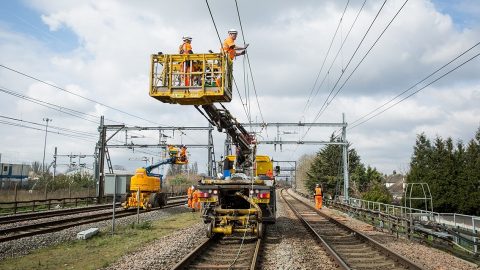 Several British engineering companies developed or are developing new products related to the electrification of railways. They will optimise the interaction between pantograph units and catenary systems as well will reduce costs for both infrastructure managers and railway undertakings.

While Britain’s infrastructure manager Network Rail is upgrading catenaries on the Great Eastern Main Line, the local engineering companies are working on new products to be applied in the electrification of railways. Thus, Ricardo Rail has developed a simulation solution, known as ‘RiPAC’. It is able to imitate the dynamic interaction between pantograph units and catenary systems in accordance with the required standards such as the Technical Specifications for Interoperability for locomotives and rolling stock (Commission Regulation (EU) No 1302/2014), Energy (Commission Regulation (EU) No 1301/2014) and the standard for current collection systems (EN50318).

The simulation package allows rail infrastructure managers to better monitor and predict the state of the overhead wires and railway undertakings to do the same but for pantographs. It is crucial for monitoring the electrified lines in tunnels and on bridges. With the help of simulation, the railway companies are able to improve maintenance and retrofitting operations of its infrastructure and rolling stock. This eventually will contribute to reducing their costs. Ricardo Rail noted that the solution is also applicable for the light rail systems.

Another innovation to be issued by the Britain-based company is a new, enhanced design of overhead line equipment. This task is being performed by Atkins, a part of the SNC-Lavalin Group, on behalf of Network Rail. Within the project, the engineering company will not provide any maintenance works but it will analyse the relationship between overhead line equipment (OLE) uplift, OLE system type, train speed and pantograph type, installed at low bridges with low headroom or long width, with twin contact arrangements, and use data to develop new rules for OLE design.

To this end, Atkins will apply its Digital Image Correlation technology, which allows the experts to measure rail infrastructure by using imaging systems and correlation algorithms. According to the contract with Network Rail, the mentioned analysis should result in new rules that will be used by OLE designers to reduce route clearance costs, including bridge reconstruction and track lowering, for new electrification schemes. Network Rail, in its turn, is regarding this project as an efficient tool to improve the electrification of the UK railway network and, therefore, to achieve the country’s Net Zero 2050 targets.