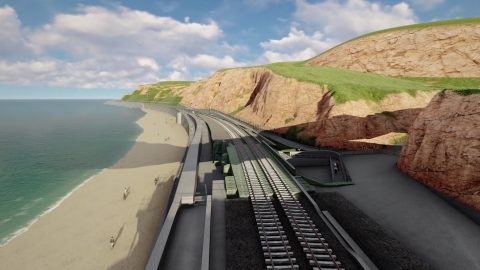 Britain’s infrastructure manager Network Rail is planning construction and maintenance works on the Exeter – Plymouth railway, a vital link for Cornwall and Devon. The 1.8-kilometre section between Parsons Tunnel, close to Holcombe, and Teignmouth in South Devon will be protected from cliff falls, landslips and sea storms. Before starting the works, Network Rail will provide six-week consultations with local communities and residents.

The updated proposals for protecting the Exeter – Plymouth railway, also known as the South Devon Main Line, has been published by Network Rail on Monday, 20 January. According to them, the rail infrastructure manager plans to construct a realigned coastal footpath, which is one metre wider and safer than the current South West Coast Path.

“A landward footpath will also be created with the new enhanced coastal path with more than 1 kilometre of new path with full coastal views will be added to the landward side of the railway between Holcombe and Sprey Point, where users can cross over the railway on a new, accessible footbridge,” Network Rail reported. The new plan will keep most of the beach near the railway.

In order to provide feedback from the parties concerned, Network Rail has scheduled the six-week consultations, until 1 March. The new proposals are available on the company’s website. It is possible to respond to the consultation online, by email or in writing via a freepost feedback form. Moreover, the rail infrastructure manager will carry out 11 public events for getting feedback from residents, communities, businesses and rail users. They will take place in several locations across Devon: in Holcombe, Dawlish Warren, Dawlish, Newton Abbot, Exeter, Torquay and Teignmouth.

“The railway is a vital artery to the South West, which communities, businesses and visitors to the region depend on for connecting with the rest of the UK. We welcome views on our updated proposals before we apply for consent to undertake the work,” route director for Network Rail’s Western route Mike Gallop said.

The South Devon Main Line is famous due to its close location to the sea. From time to time, it is being suffered from sea storms. In February 2014, the severe weather caused significant damages of the route near Dawlish railway station. “The wall between the sea and the railway line breached; a section of the wall washed away, as did 80 metres of track, platforms at Dawlish railway station and sections of the coastal path,” Network Rail reported about the impacts. As a result, the line was closed for two months.