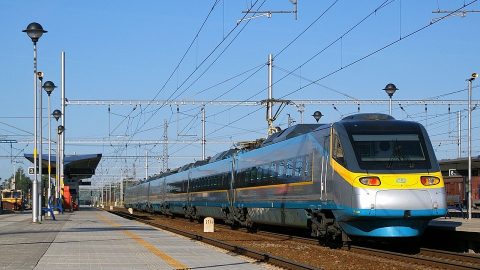 Czech rail infrastructure manager SŽDC plans to construct the high-speed railways in the country. They will allow the passenger trains to run at a speed of 320 kilometres per hour that is twice more than the current rate. The geodetic surveying has recently started on the Ostrava – Přerov – Brno line while the launch of high-speed traffic on this route is scheduled by 2030.

This planned high-speed railway will connect two major cities in eastern Czechia – Brno (second-largest in the country) and Ostrava (third-largest). It will provide a connection between them in 45 minutes (instead of 2 hours and a half today). “The geodetic surveying has been already begun on the Ostrava – Přerov – Brno route, and since September we have been working on a feasibility study. We plan to start construction in 2025 and, by 2030, trains could start to run there,” Petr Provazník, SŽDC project manager for high-speed lines, said to the local media.

The construction of the Ostrava – Přerov – Brno high-speed line is a part of a big development plan of the Czech railway network approved by the country’s government in May 2017. According to it, five high-speed corridors should be constructed in Czechia (see the map above). The first high-speed corridor will connect Prague with Brno and Ostrava. In the future, it could be extended to the Polish city of Katowice. The other corridors will also run to the borders with the neighbouring countries: from Brno via Brečlav to Vienna (Austria) and Bratislava (Slovakia), from Prague via Plzeň (Pilsen) to Munich (Germany), from Prague via Ústí nad Labem to Dresden and from Prague to Wroclaw (Poland). The entire investments required for this purpose were estimated at a level of 645 billion korunas (over 25 billion euros).

Currently, the maximum speed allowed on the Czech railway network is 145-160 kilometres per hour. These figures can be reached by the passenger trains on the Prague – Olomouc – Přerov – Ostrava line, on the Přerov – Brečlav and Brno – Brečlav routes as well as on some sections of the Prague – Plzeň – Cheb, Prague – Ústí nad Labem – Děčín, Prague – České Budějovice lines.

The state-owned railway operator České dráhy provides the SuperCity train connections at a maximum speed of 160 kilometres per hour. Since 2006, it has been operating seven Pendolino high-speed trains (ČD Class 680) for this purpose. They run from Prague to Ostrava via Olomouc and to the Slovak city of Košice via Ostrava and Žilina. Also, the Pendolino trains serve the westward InterCity link from Prague to the spa town of Františkovy Lázně via Plzeň, Mariánské Lázně and Cheb.