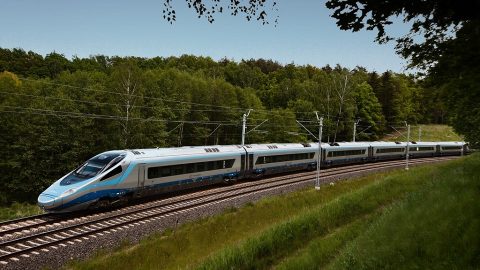 Since 2023 Polish high-speed trains will be able to accelerate up to 250 kilometres per hour instead of the current speed of 200 kilometres per hour. The faster train traffic will be implemented on the Central Rail Line that connects Grodzisk Mazowiecki and Zawiercie.

The higher speed will allow the trains to run from Warsaw to Katowice and Krakow in less than 2 hours. Today, they ride this way for 2 hours 20 minutes. In order to implement a speed of 250 kilometres per hour, infrastructure manager PKP PLK is carrying out several projects on the Central Rail Line. The Idzikowice technical station is upgrading. The works include the installation of new overhead wires, replacement of 18 kilometres of tracks and 43 switches. The modernisation is also taking place at the Opoczno Południe station.

“We are preparing the Central Rail Line to pass more trains with a higher speed,” said Ireneusz Merchel, CEO of PKP PLK. Besides the track replacement, PKP PLK also plans to equip the route with ERTMS/ETCS Level 2 and GSM-R systems to provide train traffic control and communication. They will increase the safety on the Central Rail Line.

Poland introduced high-speed train traffic in December 2014. It linked Warsaw with Gdynia, Gdańsk on the north of the country and Katowice, Krakow, Wrocław on the south. During the next two years, the service was extended to Kołobrzeg, Gliwice, Jelenia Góra, Bielsko-Biała and Rzeszów.