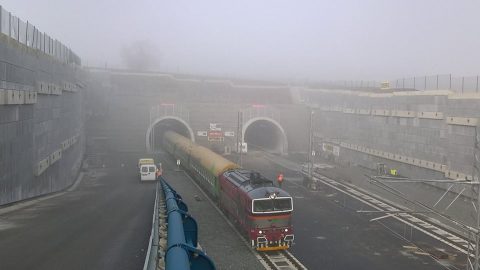 Czechia has inaugurated the southern tube of the 4150-meter Ejpovice railway tunnel, the longest one in the country, for freight and passenger traffic. The tunnel will speed up passenger traffic between Prague and Plzeň, the fourth largest city in the country, as well as facilitate freight transportation on the third Czech Rail Transit Corridor from Germany to Slovakia.

The tunnel construction started in February 2015. The project has cost 6.78 billion Czech Korunas or 261 million Euros, half of this amount provided by EU cohesion funds. The construction of the tunnel is a part of the upgrading of the Rokycany-Plzeň line, which is too twisty to increase traffic. The new tunnel resolves the problem and shortens the way. Earlier, trains took twenty minutes to complete the journey; this has been shortened to eleven minutes now.

There are more than 150 railway tunnels in Czechia, with lenghths varying from 1.7 kilometres to 23 meters, most of them single-track lines. Before the Ejpovice tunnel was constructed, the Březno tunnel was the longest in the country. This tunnel is 1,758 metres long and was opened in 2007. Previously, the title belonged to the 1,747-meter Špičák tunnel constructed in 1877.

Longer tunnels are currently discussed by the Czech authorities. The 4,985-meter Oucmanice railway tunnel was proposed in the 2000s to shorten the journey between Prague and Ostrava, the third largest city in Czechia. The project was delayed for some years, but revived last year. The construction terms have not been defined yet. There have also been talks about a 24.7-kilometre Barrandov railway tunnelm estimated at 26 billion Czech Korunas or 1 billion Euros. The idea was refused by the Czech government due to the high costs involved.