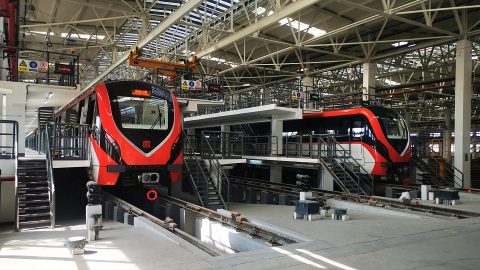 The Chinese city of Changzhou has opened its first metro line. The system was put into operation on 21 September. By 2030, Changzhou Metro will be developed into a six-line transport network.

Line 1 of Changzhou Metro has a length of 34.3 kilometres and consists of 27 stations (27 underground and two elevated). The route runs from Forest Park in the north of the city to Nanxiashu in the south and provides interchanges at Changzhou North and Changzhou Railway Stations. 36 six-car metro trains serve the transport system. They are expected to carry up to approximately 950,000 passengers per day.

The next extension of Changzhou Metro will be open in 2021. It includes the 19.8-kilometre Line 2 with 15 stations. The second route will cross the city of Changzhou in the east-west direction. By 2030, the length of the city metro system will increase in five times – up to 186 kilometres.

The Cityflo 650 solution enables safe and automatic train operation at a speed of up to 80 kilometres per hour. Bombardier Transportation has already provided the same technology in Shenzhen and Tianjin and on automated people mover (APM) systems in Guangzhou, Beijing and Shanghai. Currently, the Cityflo 650 solution is being installed on Chengdu, Hong Kong and Shenzhen Airport APMs, Wuhu Monorail Lines 1 and 2 as well as on Line 2 of Changzhou Metro.