Demonstration of accident plan and rail techniques during RailTech Europe

During RailTech Europe, visitors can experience various rail techniques from close quarters on a special demonstration square on the grounds of the Jaarbeurs in Utrecht. Rail supplier Alom will demonstrate the operation of their thermite welding system every day, ProRail’s Incident Team will show how they deal with accidents, and Robel will show various welding techniques.

During RailTech Europe, rail supplier Alom will demonstrate two thermite welding systems from producer Pandrol. Thermite welding is a technique in which pieces of track are welded together without a join at temperatures of over 2500 degrees. This is done with a bucket containing thermite, which is a mix of iron and aluminium powder. An ignitor is placed in the bucket which triggers a chemical reaction, through which the rails become fused to one another. Thermite welding is used to weld all types and qualities of rails, including tram rails and crane rails.

The first system that Alom will demonstrate is in a steel bucket that can be fitted with a special filter lid. Director Mark van den Rijen from Alom: “The thermite is burned in the bucket, which creates a lot of smoke. Thanks to the filter, this smoke is kept in and absorbed, which makes the work safer. It’s better for the health of welders and their colleagues in the industry, and also offers advantages when working in tunnels, for example.” As the sand cast is positioned in the bucket in an innovative way, the post-welding residue is left loose in the bucket, which makes it easy to separate. Then the steel bucket can simply go onto the scrap iron.

The second thermite welding system that will be demonstrated is in a cardboard bucket. “The advantage of this system is that almost all the material, including the bucket, is burned. As a result you barely have any residual material to get rid of, which means that a lot of time can be saved. As the bucket is made of cardboard, the system is also cheaper than systems with an iron bucket.” 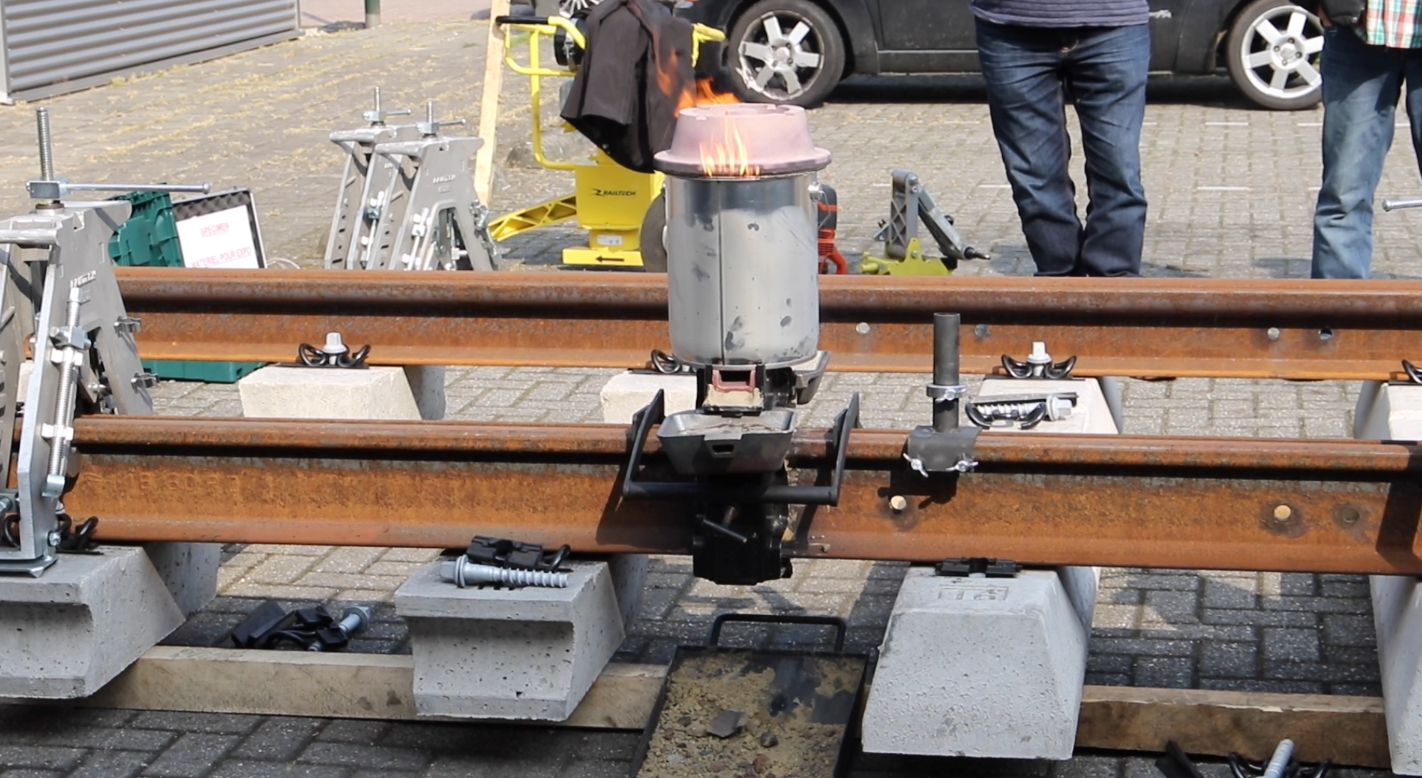 One of the thermite welding system of Alom.

If there is an accident on or around the track, workers from ProRail’s Incidents Team come into action. They ensure that all such incidents are dealt with professionally, 24/7. An incident means that the rail infrastructure is partially or completely unavailable for a considerable time, as a result of a collision with a vehicle or a person, in extreme weather, or when animals cross the track.

The members of ProRail’s Incidents Team are trained to take the right approach when dangerous substances are being transported, which can have consequences for health, safety and the environment. With the help of specially kitted out vehicles they can get to inaccessible places on the track. During RailTech Europe, the Incidents Team will demonstrate these special vehicles.

RailTech Europe is from 26 to 28 March in the Jaarbeurs in Utrecht. There will be over 150 stands from rail companies, and more than 10,000 visitors are expected across the three days. One of the main aims of this large international rail event is to share knowledge. To this end, professionals will get the chance to take part in international rail conferences and almost one hundred workshops.