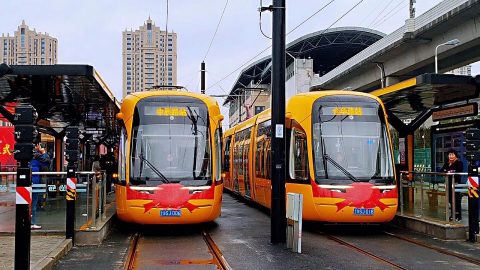 Shanghai’s urban district of Songjiang now has a tram network. The first 13.9-kilometre section was opened on 26 December 2018. The line was constructed by the French-Chinese Shanghai Keolis joint venture. The next 31-kilometre section with 46 stops will be launched in the middle of this year.

The initial route of the Songjiang tram line includes twenty stops. It connects residential areas from Canghua Road station in the west to Zhongchen Road station in the east. The tram network also provides an interchange with Shanghai’s metro line 9 for the 1.8-million counting population of Songjiang.

The Songjiang network will be operated by Shanghai Keolis joint venture, established by Shanghai Shentong Metro Group (51 per cent) and Keolis (49 per cent) during a five-year period. According to the contract concluded in August 2018, the enterprise functions include staff recruitment, formulating rules and regulations, organisational structure, emergency planning, testing of the system and expertise review. For Keolis, Songjiang network is the first tram project tram in China. The French company also operates the Shanghai metro together with Shanghai Shentong Metro Group.

The Songjiang tram network is served by fifteen Citadis vehicles supplied by another French company Alstom. The trams run every ten minutes from early morning till late evening. Alstom will deliver thirty Citadis units for the next section. The passenger traffic after launching the second tram section is expected to reach about 170,000 people per day.