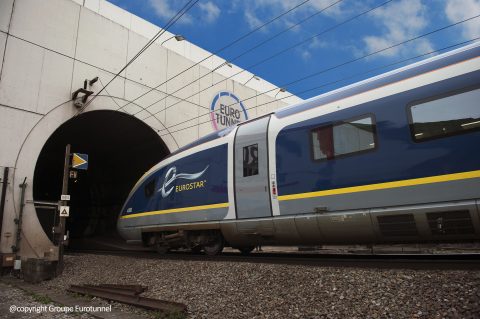 Eurostar has been the single passenger railway operator in the Channel Tunnel since the opening in 1994, but the tracks are significantly underused. That to the dismay of tunnel manager and operator Getlink. To make it easier for railway operators, the company could become a rolling stock leaser in the future.

The idea to set up a rolling stock leasing company by buying trains which can be leased to railway operators has been around at Getlink for quite some time, says Getlink spokesperson John Keefe to RailTech. The plans gathered some attention lately, as Getlink CEO Jacques Gounon was asked about it at a press event in France.

The Channel Tunnel is an open-access railway, but there are difficulties for operators to start up because the entry costs are quite high, Keefe explains. Deutsche Bahn was interested in running services through the tunnel around 2010-2012 at one point, but that did not happen for variety of issues, including the entry costs. Therefore, Getlink is looking at the possibilities of setting up a rolling stock rental company. However, it is “more of an idea rather that a concrete project at this stage”, says Keefe. Setting the structure up would take at least 5 to 10 years.

The requirements for high-speed trains to run through the tunnel are more strict that on regular land-based track. Especially for the smoke resistance of the rolling stock, as fire safety standards in tunnels are high. For example, old Eurostar sets that were retired from service through the tunnel are still good for use on other tracks, and now run between Paris and Brussels and Paris-Lyon as a regular TGV.

This means new operators that want to launch trains to the Channel tunnel have to look at new trains, which is a large investment. “There used to be a time that the issue was the homologation of trains, but with the new generation of Siemens trains that is nog longer the case, the entry costs are the current hurdle”, says Keefe.

The more traffic, the better

Getlink gets paid by traffic through the tunnel. Operator Eurostar purchases the time it takes to run through tunnel plus a fee per passenger. With the covid-19 pandemic cutting back passengers by a whopping 90 percent and Eurostar reducing the amount of trains, the flow of income for Getlink also dried up for a significant part. In 2020, turnover was almost a third lower compared to 2019.

The main goal for Getlink is thus to get more traffic to run through the tunnel. Whether that is competition on the same lines Paris-London / London-Amsterdam or new routes, that’s the decision for the train operators, says Keefe regarding this. For the route London – Paris the tunnel is not the bottleneck, but the stations are, which often don’t have little to no room at the (international) platforms to house more trains.

About the prospects of more operators joining the Eurostar through the tunnel, Getlink is in talks with many different operators. Of these only the Spanish Renfe has publicly outed interest in operating trains from Paris to London. “Operating in France, both in high-speed and in OSP (Public Service Obligation), continues to be Renfe’s main objective for their international strategy”, said Manel Villalante Llauradó, general Director of Development and Strategy at Renfe recently in the company’s blog Destino.

What has been and is still severely Missing from the Channel Tunnel is Local Calling Services.
Where are the trains from SE England and SE and East London to destinations in NW France and West Belgium?
Gatwick, Bromley, Dartford, Stratford, Canterbury, Maidstone, Ashford, Hastings, Brighton, etc
to destination of:
Bruges, Dunkirk, Calais, Lens, Arras, Amiens, Abbeville, Rouen, Le Harve, etc…

There is a massive untapped market for the coastal communities on both sides of the channel.