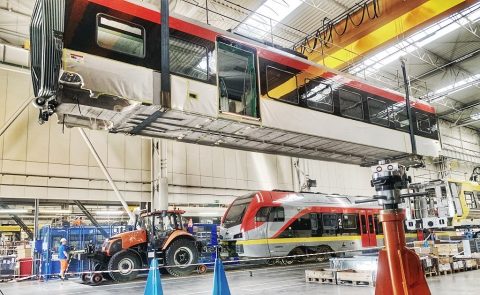 BÄR Bahnsicherung is located in Fehraltorf near Zurich, and has around 130 employees. The company has been in existence for 30 years and claims to be the largest independent service provider for railway safety in Switzerland. According to the companies themselves, there is little overlap in activities. With its products, BÄR focuses mainly on the digitalisation of the railway infrastructure, while Stadler’s signalling branch has so far been concentrating on equipping vehicles with signalling technology.

According to Stadler, a sustainable digitalisation of the railway industry requires the interaction of these two areas: intelligent railway lines can only develop their full potential if they are operated by advanced vehicles with digital systems. The takeover creates a single point of contact for customers that can offer both track and train safety technology from a single source.

BÄR Bahnsicherung AG develops, builds, installs and checks rail safety systems. In addition to the tried and tested relay technology, electronic interlocking has been added in recent years under the name Eurolocking. It is already used by many Stadler customers in Switzerland and complements the system activities.

Safety systems are still a relatively new activity for train manufacturer Stadler. The company stepped into signalling in 2016 in order to no longer be dependent on direct competitors in this field. Stadler’s own GUARDIA train control system (ETCS solution) received generic approval in 2019 and is now used in several European countries, including since 2021 in the new BLS FLIRT trains in Switzerland. For urban networks, Stadler itself developed a CBTC (Communication-based Train Control) platform, which has been used in Switzerland and the US, among others, since 2019.