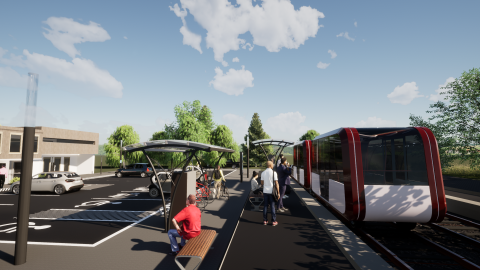 Small, autonomous vehicles on the rails, which run seven days a week and 24 hours a day. That is the concept of Taxirail, and according to Project Director Régis Coat, it might be the future of small, regional lines with low passenger numbers. How will this concept look exactly?

In 2018, there was a big discussion in France about the viability of small, regional lines, says Régis Coat, Chairman of EXID Concept & Développement, which is behind Taxirail. “There was a report saying that 9000 kilometres of small lines are not competitive, and should be closed.”

The concept of Taxirail was created to provide an answer for small railways lines. “Since then, we are in discussion with all the counties in France, with no exception”.

The main goal of Taxirail is to re-open or maintain secondary railway networks with good profitability for the operator and attractive service for the customers. Régis Coat: “These vehicles are more competitive because they are lightweight and operate autonomously, lowering staff costs. They do less damage to the track then regular, heavier passenger trains. Due to active axles and suspensions, the wheels can turn slightly and run smoothly even on difficult tracks.”

During off-peak periods, the Taxirail vehicles can be ordered on-demand through a smart phone application, hence the ‘taxi’ in the name. In the busier hours of the day, the small vehicles can platoon and thus form a small ‘train’. They are also low in pollution, being hybrid-electric. The run on electricity with batteries on board, and also have engines that can run on hydrogen or natural gas. Door opening, lighting, heating, air conditioning and entertainment are provided by solar panels.

The engineering part of the Taxirail vehicles is finished, and currently, all their technical partners are working on the different technical fields of the vehicles. Among these are Geismar, a manufacturer of railway maintenance vehicles, trainbuilder Alstom, French railways SNCF, and Thales. They will run fully automated, with Grade of Automation (GoA) 4.

“The prototype is expected to be on the tracks for testing by the end of next year. The testing will be in Normandy, on the regular tracks without other traffic”, says Coat. The company also signed a first feasibility study for the agglomeration community Caux-Seine Agglo, between Le Havre and Rouen. This study will begin in September 2021, and will see if Taxirail is a realistic and viable solution for the line.

Taxirail can not mix with too much regular trains for safety reasons. This means they can only replace regional passenger trains, and not supplement them. In France, it is possible to run Taxirails vehicles on the same tracks as freight trains. On the small lines it concerns, there are maximum two freight trains a day, says Coat. “We made procedures with parameters to not have the Taxirail and freight trains on the track at the same time.”

According to Régis Coat, Taxirail is currently in contact with regions such as Quebec in Canada, Switzerland and soon with Belgium. It could be the case that in the future, the autonomous vehicles will run on the track of their small railway lines.

I don’t understand why this transportations concept cannot be mixed with classic rail. It is said that safety is the problem, but with ETCS Level 3 this cannot be the problem anymore.
IMHO this concept could be very interesting for the Dutch Zwolle-Stadshagen-Kampen railway line, as a pilot for level 3 and Virtual Coupling technology.