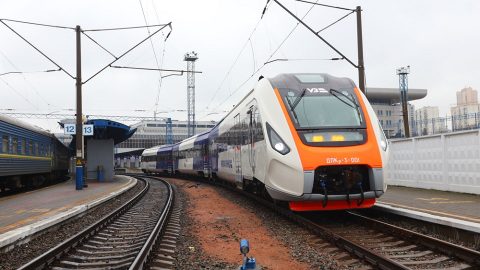 After almost two-month tests, a brand new diesel train made by Ukrainian rolling stock manufacturer Kryukov Railway Car Building Works (KRCBW) has entered service. It runs on the railway line between the capital city of Kyiv and Boryspil Airport, the busiest one in Ukraine. The DPKr-3 train performs five trips a day in each direction.

The brand new Ukrainian train has been introduced on 27 December 2019. It serves the 37-kilometre route of Kyiv Boryspil Express between Kyiv-Pasazhyrskyi station and Boryspil Airport. The three-carriage diesel train runs five times a day to the airport and the same number of trips back. It has a seating capacity for carrying 170 passengers and a total capacity for 470 passengers. The DPKr-3 train provides two classes of service: one first-class carriage with 3х2 seat layout (it is situated in the middle of the trainset) and two second-class carriages with the 2х2 layout of seats.

The almost entire route of Kyiv Boryspil Express is electrified except the four-kilometre section near the airport. As a result, Ukrainian Railway (UZ) operates diesel trains on this line. According to CEO of Ukrainian Railway Yevhen Kravtsov, the company is examining the possibility to electrify the entire route and eventually to use the electric trains on it. “Electrification of the airport line will allow us to operate the rolling stock, which is currently used on this route, to put into service for transportation in the regions. For example, we would launch this new train on the Chernivtsi – Lviv route, where there is considerable demand now,” noted Yevhen Kravtsov.

It is worth to note that the Chernivtsi – Lviv route is currently served by DPKr-2 diesel train also known as Obriy (“Horizon”). It is another diesel multiple unit produced by KRCBW. The vehicle consists of three carriages but provides one class of service. Due to this, it has higher seating capacity – 283 seats. KRCBW manufactured this train in 2014. Since 2015 it is running on the regional non-electrified routes in Western Ukraine including the above-mentioned line between Lviv and Chernivtsi.