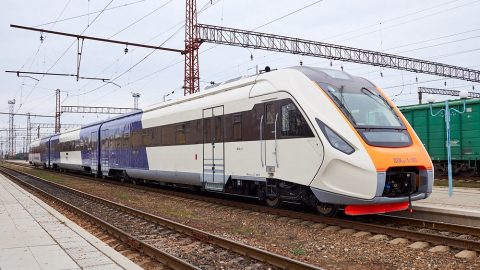 Ukrainian rolling stock manufacturer Kryukov Railway Car Building Works (KRCBW) has completed the assembly of the first DPKr-3 train. This brand new type of diesel multiple unit has been developed by the company in less than a year. In the coming days, the new train will start to perform the first trial runs.

The month-long tests of the DPKr-3 diesel train will be carried out on the Novomoskovsk – Balivka railway in the Dnipropetrovsk region. Currently, the preparatory work is providing by the experts from KRCBW, Dnipro National University of Rail Transport and Knorr-Bremse. Inter alia, they are installing the equipment necessary for the brake examination. After finishing the trials, the vehicle will be transferred to Ukrainian Railway (UZ). It will use the new three-car diesel train on the rail link between Kyiv and Boryspil International Airport.

The DPKr-3 diesel train has two Voith-made engines with a power of 588 kilowatts each. According to KRCBW, this type of engine is more cost-effective. The new vehicle has a seating capacity for 170 passengers and two classes of carriages. The first and last coaches are second-class with 3х2 seat layout while the first-class carriage is situated in the middle of the trainset. It has the 2х2 layout of seats equipped with USB-sockets. All the carriages are equipped with the special information monitors to show the train route, provide the passengers with announcements and entertainments.

For KRCBW, the DPKr-3 train is the second type of the diesel multiple unit. Five years ago, the Ukrainian company produced one DPKr-2 three-car diesel train. It was named as Obriy (“Horizon”). Since October 2015, it is is being operated by Ukrainian Railway (UZ) on the regional non-electrified routes in Western Ukraine. The vehicle has a higher seating capacity for carrying 283 passengers. However, these seats are less comfortable. Also, the DPKr-2 train consists of only third-class carriages with the 3х3 seat layout. It is worth to note that both types of diesel trains can speed up to 140 kilometres per hour.