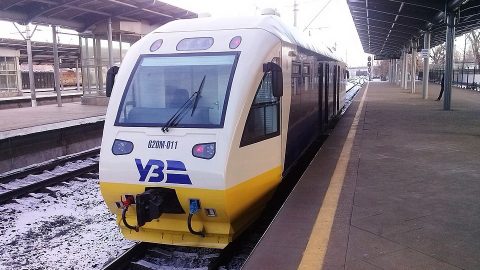 Ukrainian Railway has launched a rail link between the capital city of Kyiv and Boryspil airport, the busiest airport of the country. It is the first airport rail connection in Ukraine. The new train is branded the Kyiv Boryspil Express.

The Kyiv Boryspil Express train made its first 37-kilometre trip in the morning of 30 November, transporting from Kyiv to Boryspil airport a group of Ukrainian officials, including President Petro Poroshenko, Prime Minister Volodymyr Groysman, minister of infrastructure Volodymyr Omelyan and several others. The service became accessible to common passengers in the afternoon.

The train rides 30 times per day in each direction and makes an intermediate stop at Darnytsia station. From start to end, the journey costs 80 Hryvnias (circa 2.5 Euros). In the future, new stops will be added, interconnecting them with other modes of public transport. CEO of Ukrainian Railway Yevhen Kravtsov revealed that a stop will be constructed at Vydubychi station. According to him, it will provide a direct connection to the nearby metro station of the same name. The terms of these works have not been defined yet.

Ukrainian Railway has invested 480 million Hryvnias (circa 15 million Euros) in the project. This amount was allocated to the construction of 4-kilometre of non-electrified single-track railway section between the airport and the existing network, 272-metre railway overpass over the Kyiv – Kharkiv highway, installation of a covered passenger platform close to the airport’s Terminal D and a crosswalk between them, etc.

Also, Ukrainian Railway modernised five diesel railbuses Pesa 620M with a seating capacity of 91 passengers and a total capacity of 169 passengers. These units were produced in 2008-2009 by Polish rolling stock manufacturer Pesa. Four railbuses run on the route, one is a spare unit.

A lot of Ukrainians expect that the Kyiv Boryspil Express train will facilitate their journey to the country’s main airport. Today, the bus travel from Kyiv to Boryspil airport takes an hour or even more due to traffic jams on the southern bridge across the Dnieper river. Moreover, the journey costs 100 Hryvnias (3.1 Euros). Due to the unpredictability of the time arrival, a lot of passengers prefer to take a taxi.

Ironically, one of the trains of the Kyiv Boryspil Express broke down on the way to the airport on the second day of operations. Several passengers decided to get off the train in order to catch their flight, despite snowfall and frosty weather. One passenger missed his two-segment flight from Kyiv to Australia via Doha. Ukrainian Railway refunded his ticket from Kyiv to Doha and delivered him to the airport by car, while the airline rebooked the flight from Doha to Australia.

The Ukrainian government had been discussing the construction the railway to Boryspil airport since 2010. In 2011, an agreement was signed with the Export-Import Bank of China and China National Machinery Industry Complete Engineering Corporation (CMEC). The bank provided a 372.3-million dollar loan (327.6 million Euros), while CMEC became contractor of the project.