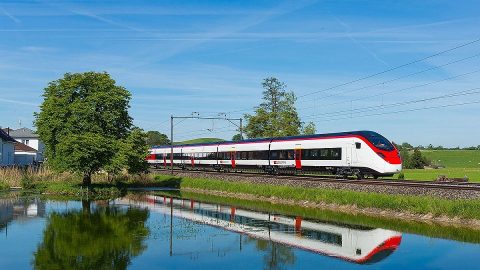 Swiss rail operator SBB has started trials of the Giruno train. The first trip with passengers was made on 8 May. The train will start to run regularly in December.

The first rides will take place on the line between Basel and Zurich Airport. At the second stage of trials, the Giruno train will run via the Gotthard Base Tunnel to Ticino. This single-decker high-speed vehicle was ordered by SBB especially for travelling via the longest railway tunnel in Europe. The Giruno train was certified in early April for operations in Switzerland, Italy, Germany and Austria.

The Giruno train was manufactured by Swiss company Stadler Rail. The manufacturer will supply 29 eleven-car units of this type. Stadler Rail calls it SMILE while SBB classifies the vehicle as Giruno. The name means buzzard in Rhaeto-Romanic. The Giruno high-speed train has a seating capacity for carrying 810 passengers. The vehicle is equipped with a low-floor entrance appropriate in four countries. The train is capable to speed up to 250 kilometres per hour. However, it was licensed for operations at a speed of 200 kilometres per hour.