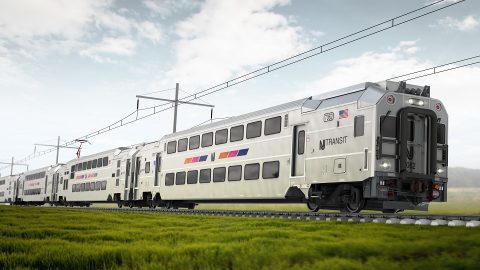 Bombardier to deliver 1,000 coaches for US commuters

Bombardier Transportation will supply 113 Multilever III double-decker coaches for New Jersey Transit Corporation (NJ Transit). The deal worth 585 million Euros also includes an option for 886 additional passenger cars. The delivery of the first Multilevel III coaches will start in late 2022. They will enter into service mid-2023.

The ordered cars will serve the commuter railway routes of the US transport company, mostly centred on transportation to Newark and New York. The deal includes the delivery of different types of coaches. “This contract will consist of cab cars, trailer cars, restroom-equipped trailer cars and new power cars that can replace locomotives and create self-propelled trains, providing NJ Transit with increased operational flexibility. Additionally, the Multilevel III cars will be fully compatible and interoperable with the Multilevel I and II cars”, said Pierre-Yves Cohen, the Bombardier’s President responsible for products and engineering.

The Multilevel coaches are equipped with Positive Train Control equipment, colour infotainment screens displaying real-time information about stations and connections, USB charging ports, an intelligent LED lighting system and onboard video surveillance. The cars are suitable for disabled passengers due to, inter alia, wider vestibules. The installed racks allow commuters to carry bikes in the cars. “We are confident that our new Multilevel III cars, with their enhanced technical features and passenger amenities, will provide exceptional service and meet passengers’ evolving expectation,,” Cohen added.

The new contract is the third one between Bombardier Transportation and New Jersey Transit Corporation. The parties have a strong partnership since 1980. In December 2002, NJ Transit awarded Bombardier Transportation with the first deal for supplying 100 Multilevel I coaches. The first units were entered into service in 2006. The delivery was extended by three option calls to 329 cars in 2005-2008.