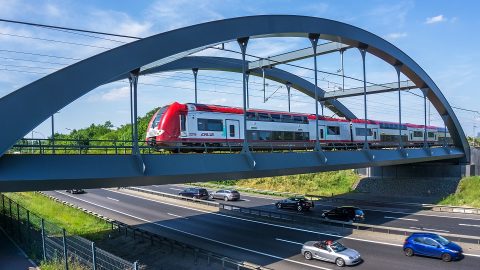 French technology company Alstom has been awarded a contract for supplying 34 double-deck Coradia trains. The deal valued at 360 million Euros was concluded with Luxembourgish national rail operator CFL. It allows the carrier to double the number of double-decker trains run on the country’s regional routes from 30 to 64 units.

The first new Coradia units will be delivered to Luxembourg in December 2021. The ordered fleet will consist of two type trains – 80-metre and 160-metre long units. They are capable to speed up to 160 kilometres per hour.

According to Alstom, 34 double-decker trains have a total capacity of more than 15,000 seats. Owing to new comfort and high-capacity double-decker cars, CFL intends to increase the passenger traffic on its routes. “The new trains are necessary for the replacement of existing material and to meet the significant expected increase of passengers commuting to Luxemburg,” the company’s CEO Marc Wengler said.

Today, the CFL’s double-decker fleet consists of 30 three-car units. All of them were produced in 2004-2010 and were delivered by two contractors – Alstom and Stadler. French manufacturer supplied 22 CFL Class 2200 units based on Coradia platform like the ordered vehicles. At the same time, Swiss rolling stock company Stadler delivered to Luxembourg eight CFL Class 2300 units based on Kiss platform.