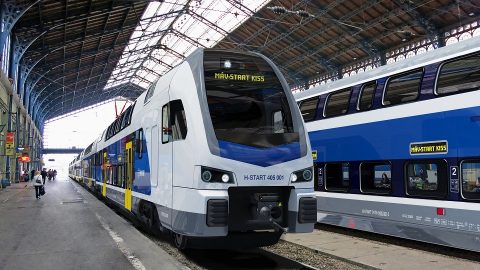 Swiss rolling stock company Stadler was awarded a new contract for the delivery of eight additional six-car double-decker Kiss trains by Hungarian passenger service operator MÁV-Start. The new units will enter into service in the first half of 2021.

The deal is a part of a framework agreement signed by MÁV-Start and Stadler last year, when the parties arranged the delivery of 11 double-decker electric trains with an option for 21 additional units. The mentioned eight trains are a batch of the supplement. The Hungarian carrier intends to call for the remaining units. The procurement is financed by the Integrated Transport Operational Programme (ITOP) of the European Union.

Currently, MÁV-Start does not use double-decker trains. The first Kiss units are expected to enter into service at the end of 2019. The new double-decker trains will serve the two busiest suburb lines that start in the country’s capital: the first line connects Budapest with Szob via Vác while the second one goes from Budapest to Szolnok via Cegléd.

The main feature of the new six-car trains is their seating capacity for 600 passengers, which is twice as much as in a single-decker unit with the same length. The Kiss trains ordered by MÁV-Start will be 155.88 metres long, 2.8 metres wide and 4.6 metres high. The units will run at a maximum speed of 160 kilometres per hour. The trains will be produced by Stadler in cooperation with Hungarian rolling stock manufacturer Dunakeszi Járműjavító.

The coaches will be equipped with EVM and ETCS Level-2 train control systems, modern passenger information system, cutting edge air conditioning and free WIFI. Moreover, the new trains will be equipped with four toilets. One of them will be accessible for persons with reduced mobility. The train has multifunctional areas that are capable of having four wheelchairs, twelve bicycles or five strollers.